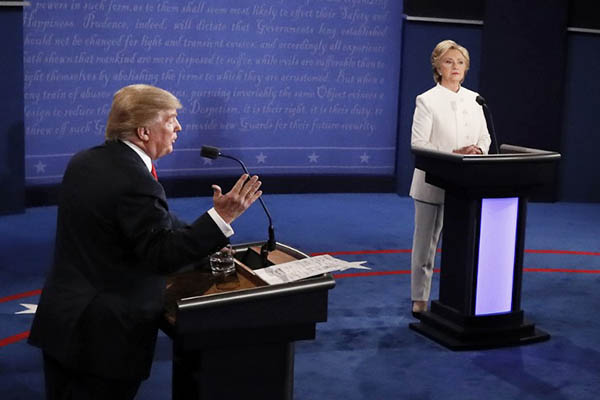 Third debate between presidential election contenders raises questions about Trump’s plans if he loses at polls.

The third and final debate of the caustic 2016 U.S. presidential election started with a sober tone… but ended up with Donald Trump questioning the fundamental underpinnings of the nation. Here are four key moments:

If Americans entered the debate concerned about what happens the day after this brutally fought election, Trump did little to assuage their fears.

An hour into the 90-minute battle, the Republican nominee was asked whether he would respect the election result and concede if he lost. His answer will go into the history books. “I’ll look at it at the time. What I’ve seen is so bad,” he said, repeating unfounded allegations of vote rigging.

Fellow Republicans rushed to denounce him, and his Democratic rival Hillary Clinton declared herself “appalled” by what she said was an attack on 240 years of U.S. democracy.

Asked about embarrassing leaked emails, Clinton pivoted to Trump’s much scrutinized relationship with Russian President Vladimir Putin and the Republican’s refusal to pin the leaks on Moscow.

Clinton suggested Putin wanted a “puppet” in the White House, which prompted a remarkable exchange. “No puppet. No puppet,” said Trump, talking over Clinton. “You’re the puppet!”

“No, you’re the puppet,” he continued.

Composing himself, Trump said: “I never met Putin. This is not my best friend. But if the United States got along with Russia, it wouldn’t be so bad.”

Both Clinton and Trump threw plenty of meat to their core political bases—ticking boxes on guns, abortion and taxes. Trump was again on the defensive over his policy of forcibly deporting millions of illegal migrants.

“We have some bad hombres here, and we’re going to get them out,” he said.

Clinton described that as an idea “that would rip our country apart.”

Some of the sharpest exchanges came when Trump accused Clinton and her campaign team of drumming up allegations that he has groped several women. “I believe,” Trump said, “she got these people to step forward,” accusing Clinton of running a “very sleazy campaign” and adding of the claims aired by several women dating back decades: “It was all fiction.”

Trump boasted, “I didn’t even apologize to my wife,” saying he did nothing wrong and so had nothing to apologize for.

Later, when the topic turned to taxes, Clinton suggested that Trump might try to wriggle his way out of paying. “Such a nasty woman,” Trump said, leaning into the microphone.