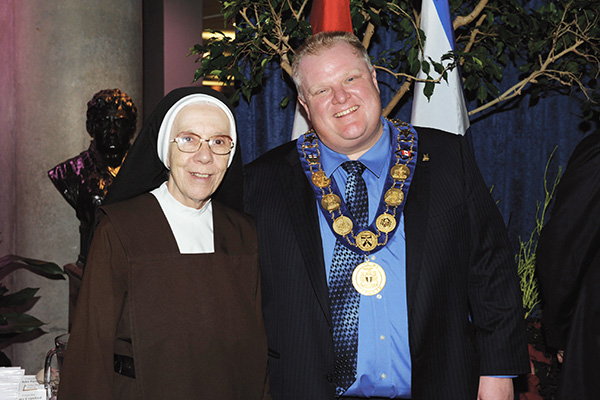 Courtesy of the City of Toronto

Toronto Mayor Rob Ford entered City Hall on May 21 with his back to a throng of reporters who had gathered at the elevator to follow him. But Ford wasn’t going to escape that easily to the City Council meeting on a casino expansion—after all, it’s not every day that there’s a video going for $200,000 that allegedly features the mayor smoking crack cocaine.

But then again, this is Rob Ford we are talking about—only six months ago, an Ontario judge ordered that Ford be removed from office after improperly using the city’s letterhead to solicit $3,150 in donations for his high-school football charity. Ford later won on appeal and remains in office.

But back to the alleged crack smoking. On May 16, Gawker posted a lengthy description of a video the website says is of Ford allegedly puffing on a crack pipe. “I’m 100 percent sure” that it’s Ford, Gawker editor John Cook told Newsweek. But there’s a hitch: the video’s owner insists on being paid $200,000 for the footage. That’s more money than Gawker is willing to shell out to publish it.

Ford called the allegations “ridiculous,” even as the Toronto Star wrote a front-page story claiming that it could confirm the video exists. Ford does have a history of issuing denials for things that have happened: in 1999 he was arrested for a DUI and marijuana possession in Miami, and during his campaign for mayor in 2010, he insisted he had only been charged with failing to take a Breathalyzer test. (Instead, according to court documents, he just said, “Go ahead, arrest me.” He pleaded no contest to driving under the influence of alcohol and drugs.)

So to prove the tape’s existence, Gawker has started a “Crackstarter” campaign to raise the $200,000 for the video. The Gawker staff has put $15,000 of its own money into it and had raised more than $88,000 for the tape. Donors are given prizes, ranging from dinner with the Gawker staff (for a $1,000 donation) to the phone that Gawker says the video was taken on ($10,000 donation).

Gawker editor Cook—who traveled up to Toronto, reportedly to see the tape—wants it so much that he’s apparently even willing to sell space on Gawker in exchange for cash: he is currently talking to possible donors about working out a deal where they could write promotional content for the site or be given credit for sponsoring the publication of the video.

“I see my job as finding true things and putting them on the Internet,” Cook says. “We’re a gossip website, and that’s what I think news and gossip is about. I generally don’t think that people who preside over law-enforcement agencies and enforce laws against possession and use of crack cocaine should be smoking crack cocaine.”

Gawker.com to Shut Down Next Week