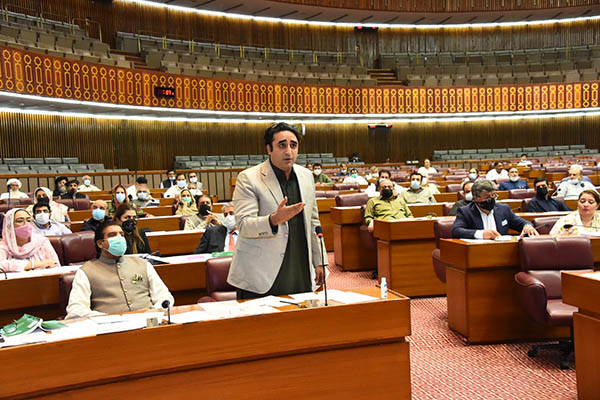 The Pakistan Tehreek-e-Insaf-led government on Thursday passed 21 laws in the National Assembly despite an opposition boycott that marked a particularly contentious session of the Lower House of Parliament.

At the commencement of the session, opposition members pointed out lack of quorum to Speaker Asad Qaiser, but he dismissed their call to adjourn the proceedings. PPP Chairman Bilawal Bhutto-Zardari, speaking on the floor of the House, questioned why the government sought to legislate through ordinances instead of debating proposed laws in Parliament. “If you want a consensus, talk to us and don’t bring ordinances in the dark of night,” he said. “You were advocating the case of Kashmiris and now that of Kulbhushan?” he added, in reference to a bill that grants foreign convicts right to appeal if they have been sentenced by military courts.

The PPP leader stressed that all legislation should come about as a result of mutual understanding. “The problems of people will be not be solved if you don’t listen to us, don’t allow us to speak and don’t even give us the right to read your bill,” he said.

He also discussed a bill seeking to grant internet voting rights to overseas Pakistanis by questioning what their constituency was. “Overseas Pakistanis should not contest against us but with each other,” he said, suggesting that they should have their own special constituencies. Similarly, PMLN’s Ahsan Iqbal, PPP’s Raja Pervez Ashraf and JUIF’s Shahida Akhtar Ali slammed the proposed electoral reforms bills as “one-sided.”

Responding to the opposition, Foreign Minister Shah Mahmood Qureshi fell back on the incumbent government’s routine policy of branding dissent and debate as a foreign conspiracy. “India also wants Pakistan not to abide by the decision of the International Court of Justice and the opposition also wants this,” he claimed. “Overseas Pakistanis work hard and send money to the country. We are giving them the right to vote. They [opposition] want to deprive Pakistanis abroad of the right to vote,” he added.

Law Minister Farogh Naseem, likewise, said that the ICJ had issued directions for introducing the law on appeal.

The laws passed by the government, which still require passage in the Senate, are as follows: