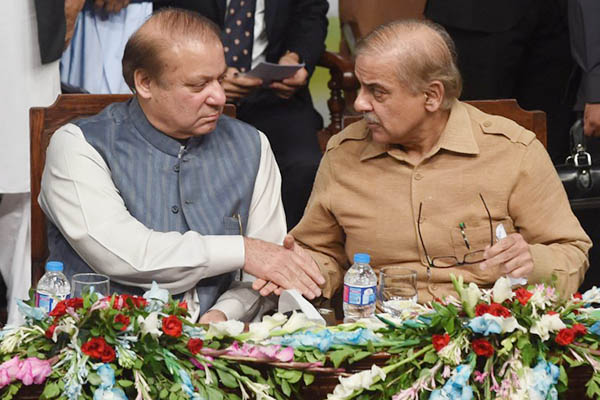 The cracks within the PMLN are widening

During a meeting last week, PMLN parliamentary leaders decided erstwhile head Nawaz Sharif’s confrontation with the Army should not be endorsed. Current party chief Shahbaz Sharif chose to “reinterpret” his elder brother’s interview with daily Dawn, vouchsafing that whoever advised Nawaz to give the interview—in which the ousted prime minister hit out at the presence of non-state actors in Pakistan—was no friend of the PMLN. But Nawaz wouldn’t bend to this “dodging” gesture of his party, insisting he had openly taken on the same military he had earlier called “extraterrestrials”—a reference that was not lost on anyone, including the retired generals who fire answering salvos on the country’s mostly hostile TV channels.

The PMLN leaders gathered at Parliament House were divided. Some differed with the party’s decision against using Sharif’s anti-Army “narrative” during upcoming polls. They likely do not support Shahbaz returning to his pro-Army line now that Nawaz has opted for “martyrdom.” However, this same road risks alienating the party’s biggest voter bank in Punjab province.

It is not too surprising that residents of Punjab balk at anti-Army rhetoric. Comprising 60 percent of the country’s population, many parts of the province back the ideology favoring the non-state actors Nawaz now attacks. The party therefore is at risk from “fissures within,” potentially endangering its chances of winning the 2018 elections.

This division is already visible, with the PTI picking up PMLN defectors and other “electables” before the polls thanks largely to its widely publicized support of the Army on foreign policy issues involving India and the U.S. Thanks to a myriad of factors, the PMLN faces a very real possibility of being trounced in Punjab and yielding authority to the PTI. If these predictions pan out, the next “great leader” of the nation will no longer be Nawaz Sharif but Imran Khan.