Home Latest News Gunfight Between Troops and Militants in Khyber

Gunfight Between Troops and Militants in Khyber 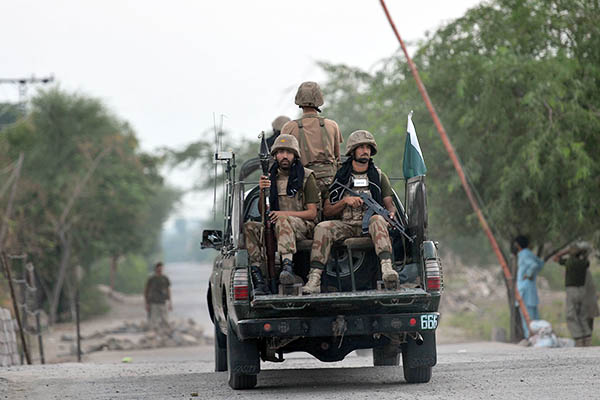 At least eight paramilitaries were killed in a gunfight with militants in the northwest early on Friday, while a policeman died when a hidden bomb exploded in a city center.

The gunfight, which also left five militants dead, occurred in the Jamrud area of the Khyber Agency. The paramilitaries, who served with the Frontier Corps (FC), came under fire by militants around 1:00 a.m., according to a senior security official. “A team of FC was moving to counter the militants on a tip off but they became under fire beforehand. At least eight security persons and five militants were killed in an exchange of fire,” the official said.

The official added that a paramilitary soldier was also wounded in the gunfight, which took place in the village of Ghundai. Another official said that three militants were also arrested after the gun battle while around a dozen escaped from the scene. “A curfew was imposed in the area and a door-to-door search is underway,” he said.

The bomb attack that left the policeman dead and three others wounded took place in the Yakatoot area of Peshawar. “The bomb exploded near a police van in Yakatoot neighborhood at around 4:00 a.m., killing a policeman and injuring three others,” said a senior police official. “It was apparently a timed bomb containing around two kilograms of explosives,” he said.