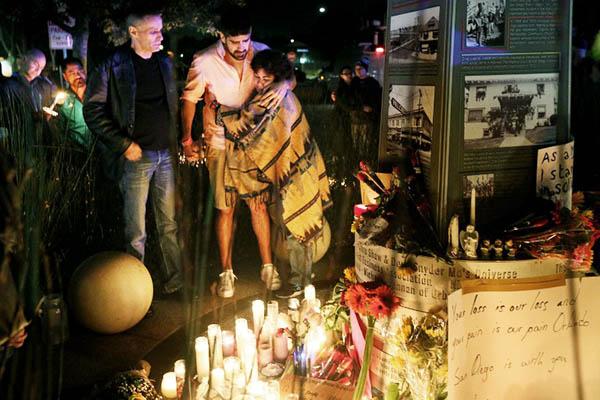 The massacre in Orlando may have been restricted with more stringent gun control, but it’s unlikely anything could have stopped Omar Mateen.

Fifty people are dead and more than 50 others wounded, some critically, in the Orlando shooting. Here are some facts, so far.

The shooter, Omar Mateen, was a 29-year-old American of Afghan stock. He was a Muslim. He used, we are told, an AR-15 rifle and also carried a Glock pistol (we don’t know which model). He attacked a gay nightclub. He called 911 and pledged allegiance to I.S., the terrorist group that controls territory in Iraq and Syria and has declared a self-styled caliphate.

Then there’s the list of conjectures. Mateen hated gays, as reported by his father on the basis of an incident about how angry he got when he saw two men kissing. He was bipolar and disturbed, as reported by his ex-wife who said that he beat her and was generally violent. That Mateen’s act was religious. That the shooting was a hate crime against the LGBT community.

Then there’s the usual ritual of why he did what he did. What could have radicalized him? NB: radicalized in what way—to kill for the religion or to kill gays because he thought they were deviant? The imam of the mosque he frequented says he was a very quiet youth. He would come to the mosque, pray and leave. He never sought any guidance and didn’t mingle with others.

So, did it happen for one or the other reason, or was it a mix of everything and one aspect cannot be possibly separated from the sum-total that was Omar Mateen?

It’s a tough question to answer because an individual is a multitude and yet, at some point in his/her life, one or a few aspects can combine to dominate the moment.

For instance, for Donald Trump, the issue of Mateen’s alleged hatred toward the gay community or how and why he managed to acquire the guns he used in the shooting will have no space. He will, as he has, focus on Mateen’s Muslim-ness and his foreignness. The life and death and burial, just 24 hours ago, of one of America’s greatest athletes who also happened to be a Muslim was a setback to someone like Trump and other white evangelists and supremacists.

Mateen is a Godsend for Trump. In the hate and exclusion advocated by both, they are symbiotically conjoined at the hip.

The anti-gun lobby will focus on the guns. The National Rifle Association will likely put the most ironic twist on the episode to prove that banning automatic assault rifles for the civilian market doesn’t really work because Mateen used a semi-auto and yet managed to pile up so many bodies. Corollary: people, not guns, kill.

The anti-Muslim sentiment will focus on Mateen’s Muslim-ness, forgetting that mass shootings in the U.S. boast far more non-Muslim perps than Muslim ones.

Muslims will try to play down Mateen’s Muslim-ness and either say that he suddenly and inexplicably turned bloodthirsty or return the focus to his hatred of gays because, hey, even rightwing Christian groups are anti-gay. Exhibit: read Texas Lt. Gov. Dan Patrick’s tweet (since deleted).

The list can go on. Put another way, in a situation of great complexity, people tend to lose the bigger picture in favor of simpler ‘explanations’ that can plug into and reinforce their existing biases and/or agendas.

Mateen is dead, killed in the firefight with law enforcement officials, and, therefore, we will probably never know exactly why he went out there to mass-kill. But chances are that what happened at the club was planned and the trigger involved multiple aspects of Mateen’s personality.

However, in all the confusion and multiple theories, one thing stands out: the weapons used for killing.

Let’s assume certain other conjectural aspects to be constant. Mateen was religious, anti-gay and also influenced by I.S. [NB: we don’t exactly know at this point but we are making an assumption.] How would he have expressed his anger if he did not have access to guns? If he could only find a club or a knife or a machete or a sword? He could still attack people, but how many could he have killed with those ‘weapons’?

Or, let’s take it a step higher. He had a non-automatic weapon with a five- to seven-round magazine. That would have required chambering the round for every shot. He could have killed more but still not be able to kill so many. Take another step on the ladder: the semi-auto, with a modular design where the upper receiver can be easily and quickly substituted for another and magazine variations can allow a shooter to carry 20 to 100 rounds depending on the magazine he is using. His rate of fire, after he has chambered the first round, will depend on how quickly he can acquire the targets and squeeze the trigger. And if he is really good at it, how effectively he can double-tap. Suddenly, his ability to shoot at a large scale on a number of targets enhances manifold. But there’s yet another step up the ladder: the automatic assault rifle. Let’s assume an M16A2: he can fire 12/15 rounds per minute, sustained, and 700/900 rounds per minute, cyclic.

It should be obvious how with every step up the ladder, the ability to generate violence increases exponentially. So, while at one level it is true a gun doesn’t kill in and of itself and requires a hand, with the hand available, the gun has a much greater capacity to lend itself to the hand’s hate than a club or a knife.

How it works can easily be experimented. Take a Glock. It can be factory-stripped into 33 parts and field-stripped into five. Spread the parts on a table and it is nothing more than an assembly of metal, polymer, rods, small and smaller, springs etcetera. Begin to assemble them and you get the pistol. Load the magazine and clip it in. Pull the slide back and chamber the round. The various parts are now a whole and the whole, with the round in the chamber, is lethal. It needs the hand to squeeze the trigger. With every step the lethality and the purpose of the gun increases. Couple it with the intent to kill and you have the perfect evil combination.

So, yes, guns don’t kill themselves but they are designed for maximum damage. It’s the same with bomb-making ingredients. Genghis Khan was famous for mass-slaughtering his enemies. But he could not kill during all his fighting life more than what can be done with one nuclear warhead today. Man’s hatreds and passions and everything that makes him kill have remained largely unchanged over centuries. There’s been some normative progress but its speed is glacial compared to technological advances. We can kill more effectively today than we could yesterday. And, therefore, while it is important to try and figure out why some people will go out and start shooting, experience suggests that there will always be some people who will do it. The question then is: should societies have access to weapons that would allow those among us with a killing streak to kill so many in such little time?

This question is not very easy to answer. For instance, data of mass shootings (a shooting in which there are more than 4 victims, injured or dead) indicate that when corrected for population, U.S. mass-shooting frequency is comparable with other countries like Norway, Finland, Slovakia, Israel, Belgium etc. Interestingly, as for the firearms regulations, except for the U.S. and Belgium, all other countries in the data set are listed as restrictive. Similarly, while the U.S. is listed with the highest per capita gun possession, followed by Yemen, Switzerland, Finland, Serbia, accounting for the populations of Finland (5.4 million) and Switzerland (8.1 million) as opposed to the U.S. (318 million), these smaller countries have much greater gun concentration. (see, http://www.ijreview.com/2015/12/348197-paris-attack-claim-mass-shootings/ and http://www.cbc.ca/news/world/small-arms-survey-countries-with-the-most-guns-1.3392204 )

And, yet, one fact cannot be denied. If someone is bent on killing and can also find the right weapon(s), his capacity to kill increases manifold.