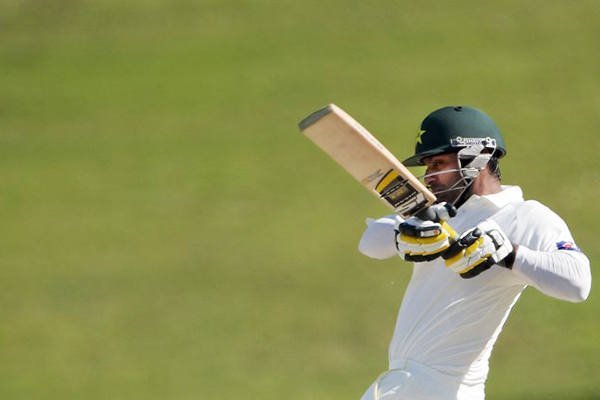 Off-spinner is the second Pakistani being probed for suspect actions this year.

Pakistan all-rounder Mohammad Hafeez has been reported with a suspected illegal bowling action during the first Test against New Zealand in Abu Dhabi on Thursday, the International Cricket Council said Thursday.

“The match officials’ report, which was handed over to the Pakistan team manager, Moin Khan, cited concerns about the legality of the 34-year-old’s bowling action,” the ICC said.

Pakistan won the match by 248 runs to take a 1-0 lead in the three-match series.

Hafeez’s bowling action will now be scrutinized further under the ICC process relating to suspected illegal bowling actions reported in Tests, one-day matches and Twenty20s. As per ICC rules on dealing with the suspect action, Hafeez is required to undergo testing within 21 days, and, during this period, Hafeez is permitted to continue bowling in international cricket until the results of the testing are known.

Hafeez is the second Pakistani behind Saeed Ajmal, also an off-spinner, to be reported in a major crackdown on bowlers with suspect actions the ICC launched in June this year.

Zimbabwe match referee Andy Pycroft was the common official in both the Ajmal and Hafeez cases. He was also the match referee when Ajmal was reported during the Galle Test against Sri Lanka in August this year.

The on-field umpires in the Abu Dhabi Tests were Sri Lanka’s Ranmore Martinesz and Rod Tucker of Australia while the TV umpire was Paul Reiffel, also from Australia.

Hafeez’s action was also reported during a Twenty20 league in India in September this year, but the PCB said the bowler did some remedial work in the national cricket academy in Lahore. He was not reported during the 2-0 win over Australia which finished last week.

Hafeez’s action was cleared after being reported in a one-day match against the West Indies in Brisbane in 2005. Before the Australia series, Hafeez said he has been bowling with the same action for 11 years: “Look, I have not changed my action. It’s the same for 11 years now, so I am confident and have no worries over my action.”