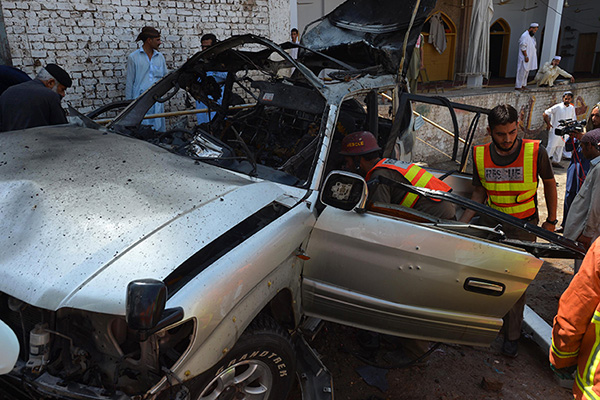 A suicide bomber on Friday targeted the vehicle of an Afghan Muslim scholar in northwest Pakistan, killing three people including the cleric’s guard and driver, officials said.

The bomber detonated his explosive jacket close to Haji Hayatullah’s car as worshippers were leaving a mosque following Friday prayers in Peshawar’s congested Faqirabad neighborhood, local police chief Liaquat Ali said. “The bomber blasted Haji Hayatullah’s car from the right side, killing the driver and Hayatullah’s guard,” he said, adding that a third person died of his injuries in hospital and three others were wounded.

Senior police officer Khalid Hamdani confirmed the attack and the casualties. “It was a suicide attack, the target seems to be Hayatullah who had not yet boarded the vehicle,” he said. The bomber carried about six kilograms of explosives, he said adding that the vehicle was badly damaged.

Hayatullah is the nephew of known Afghan scholar and jihadist commander Maulana Jamilur Rehman. Rehman had participated in the 10-year Muslim resistance against the Soviet occupation of Afghanistan, which ended in 1989.

I hope this time the media comes out straight on this-and not conveniently blame Taliban for this……Hedayatullah, a Salafi Cleric with connections with the Afghan Taliban cannot be targeted by Pakistani Taliban….

Is this a case of rogue Shiite elements gone awry? I hope our Ulama see to this, if we are maimed-we are victims but when we kill-who are we?

Why should Shiites suffer from such hypocrisy-we kill and are killed…..Mukafaat-e-amal….