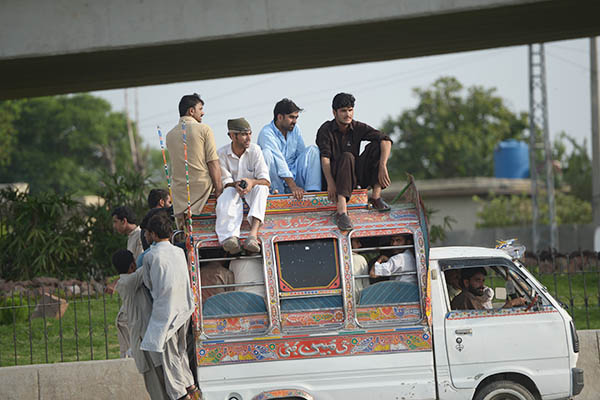 PTI says its protest is not unconstitutional, as interior minister says verdict must be implemented in full.

The Lahore High Court on Wednesday restrained Imran Khan’s Pakistan Tehreek-e-Insaf and Tahir-ul-Qadri’s Pakistan Awami Tehreek from launching a march on Islamabad in an unconstitutional way, a lawyer told journalists.

The LHC’s order came as authorities blocked almost every entry point to Islamabad on Wednesday, with more than 20,000 police and paramilitary forces deployed to try to thwart a major anti-government rally.

“Pakistan Tehreek-e-Insaf (PTI) and Pakistan Awami Tehreek (PAT) are restrained from launching a march/sit-in in Islamabad in any unconstitutional way keeping in view sensitivity of independence day and current uncertain situation in the country,” PTI’s lawyer Ahmad Owais said in Lahore quoting from a short order by a three-judge panel headed by Justice Khalid Mehmood. PTI spokeswoman Shireen Mazari told local media that the party’s protest was not “unconstitutional” and so was not restricted by the verdict.

Interior Minister Chaudhry Nisar Ali Khan addressed a press conference in which he backed the court verdict. “We [the government] have no issues with a constitutional protest,” he said. However, the interior minister said that in light of the verdict, the PTI and PAT were restricted from protesting until an adequate security plan could be conceived that would ensure the safety of the participants.

The interior minister also apologized to the nation on behalf of the government for the travel restrictions imposed by shipping containers blocking roads across the Punjab province and in Islamabad. However, he said these were required for the sake of security and would be removed as soon as possible.

Major roads were barricaded with shipping containers and police used excavators to dig up smaller roads in Islamabad, a day before two opposition protest marches are due to converge on the capital. Imran Khan and Canada-based preacher Qadri plan to march on the city on Thursday, Pakistan’s independence day, to demand Prime Minister Nawaz Sharif resign and call fresh elections.

Both Khan and Qadri, who led mass demonstrations in Islamabad early last year to urge electoral reform, allege that the May 2013 general elections were rigged. The government on Wednesday asked the Supreme Court to set up a panel of judges to investigate claims of rigging in last year’s general election—a move announced by Sharif late on Tuesday to try to ease political tension. The judicial probe was a key demand of Khan, but he rejected Sharif’s proposal and demanded he step down.

Sharif’s landslide general elections victory in May 2013 saw Pakistan’s first ever handover of power from one civilian-led government to another after a full term, in polls that local and foreign observers called credible. In his television address on Tuesday, the 64-year-old prime minister said economic progress had been made under his government but the opposition groups’ protests would reverse the gains.

Khan and Qadri, who say they are struggling for an “interim national government” consisting of technocrats and experts, have announced they will merge their marches. Tension has gripped parts of the country since last week, with running clashes between police and supporters of Qadri in Lahore over several days leaving at least one protester dead.

The government for its part has rejected the allegations of vote rigging and accuses the opposition groups of attempting to obtain by force what they could not achieve through democratic means.

Punjab law minister Rana Mashhood told AFP that more than 1,000 Qadri and Khan activists had been detained in recent days on suspicion of inciting or perpetrating violence.