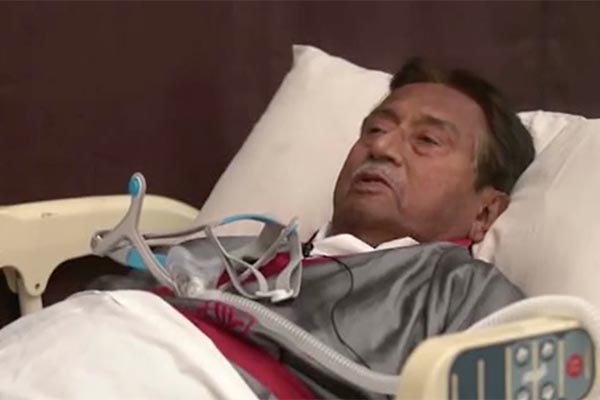 This high treason case was only taken up because of a personal vendetta against me, alleged former Pakistan Army chief Pervez Musharraf in a video statement released on Wednesday.

Speaking from a hospital bed in Dubai, as he had in the immediate aftermath of a special court finding him guilty of high treason, the 76-year-old former president claimed the allegations against him were politically motivated. “This is un unprecedented case in which neither the defendant, nor his lawyer, were allowed to speak in his defense,” he said, adding that he had learnt of the court’s death sentence for him while watching TV.

The former military dictator was tried and sentenced in absentia for subverting the Constitution in 2007, when he declared a state of emergency. He has been living in self-exile since 2016, when he was allowed to travel abroad for medical treatment. At the time, his lawyers had vowed he would return to face trial “within weeks,” but had later rebuffed the court’s summons, saying Musharraf would not return without guarantees of “foolproof security.” His trial was allowed to proceed after he was declared an absconder, a designation that allows courts to conduct trials without requiring the presence or statement of the accused.

Musharraf said he had been willing to submit a statement to a special commission if it had traveled to Dubai to see him, but the court had rejected this. “I call this verdict suspicious because supremacy of law was ignored throughout the trial,” he claimed. “Under the Constitution,” he continued, “it was not necessary or urgent to hear this case.”

The former president said this case was designed to target a single individual by “people who are in high positions and who misuse their power,” though he did not specifically identify who he was referring to.

Musharraf said he respected Pakistan’s judiciary, but “in my opinion, Chief Justice [Asif Saeed Khan] Khosa, showed his intentions and determination by saying he ensured a speedy verdict in this case.” The former Army chief was referring to a statement attributed to the Chief Justice that has been strongly refuted by the Supreme Court of Pakistan as “baseless.”

The former president went on to question how any judge who had personally benefited during his tenure could issue a judgment against him. He also thanked the people of Pakistan and the Pakistan armed forces for remembering his services for the country. “This is the biggest honor for me that I will take to my grave,” he said.

Musharraf ended his video by saying he would announce his next plan of action regarding the case after consulting his legal team.

A special court earlier this week found Musharraf guilty of high treason and sentenced him to death under Article 6 of the Constitution for declaring a state of emergency in 2007 and holding the Constitution in abeyance. The Army responded by accusing the court of ignoring due legal process and questioning how a patriotic former general could ever be declared a traitor. The Pakistan Tehreek-e-Insaf-led government, too, has said the case was “unfair” and vowed to aid in Musharraf’s appeals process.

the court has been doing some really funny sh*t lately. Letting Nawaz Shareef go on fake illness excuse without a collateral when clearly Musharraf looks sicker then Nawaz Shareef. and now this! Feels like someone on the judges bench has been taking favors. The decision against musharraf is vile. on a scale of 1 to 5 of evil dictators of pakistan, musharraf would be a -5. He literally made pakistani’s more socially aware of our condition as a nation. He freed the media, gave autonomy to cities stopping the provincial government (PPP) from embezzling funds meant for development of the city. In his 8 years Pakistani middle class were finally prosperous enough to afford a car. Advancement in digital technology also started with his rule. Then PPP and PML-N came and ruined the country in under 10 years. The politicians want people to remember him by just 2 words military dictator but he deserves a better word “reformer”. We finally stopped voting for thieves and we owe that to him as well.

Juditionary of Pakistan must be fair from tail to top ,when supreme juditionary announce this type of decisions,how can lower courts do justice for common very said and dangerous for our country….please keep on observation all judges from magistrate to supreme justice s…..

Only GOD can save Pakistan’s situation very sensitive, especially a new emerging conflict between army and judiciary

No comment upon present situation – my single/simple question is ”Who is/was responsible for DACCA FALL 1971 – Is there any Court/Law to treat the actual defaulter in the same manner ?