Home Latest News ‘I Will Not Resign’

‘I Will Not Resign’ 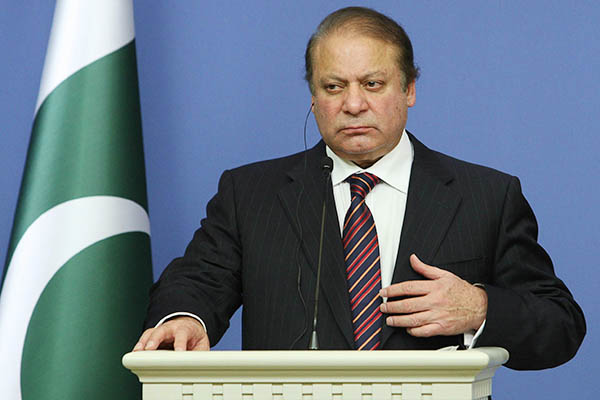 Rubbishing rumors that he is resigning to end an ongoing standoff in Pakistan’s federal capital, Prime Minister Nawaz Sharif has said he will not bow to a “few thousand,” as opposition parties expressed their support.

In a statement issued after a meeting between the premier and senior leaders of opposition parties in Parliament, he said: “Let me clarify to all those forces who wish to dent this democracy: my government will not let anybody introduce a tradition of a few thousand people taking over Parliament’s supremacy.” The statement added that the prime minister would not resign or “go on leave” under any circumstances in a direct response to the demands of anti-government protesters led by cricketer-turned-politician Imran Khan and populist cleric Tahir-ul-Qadri. Both Khan and Qadri claim Sharif was elected through a rigged election and have been staging a sit-in in Islamabad since Aug. 15.

Earlier on Monday, local media claimed Pakistan Army chief Gen. Raheel Sharif had asked the prime minister to resign during a meeting between the two leaders to resolve the political standoff. The rumors were denied by the prime minister’s spokesman, and the military, which expressed the Army’s support for democracy.

Meanwhile, the opposition parties in Parliament and P.M. House issued a joint statement vowing to prevent any unconstitutional steps that could damage the democratic process in Pakistan. “We will stand with the prime minister for the supremacy of Constitution and Parliament,” it said. “We also condemn the biased reporting of a few local TV channels promoting the agenda of protesters through live coverage,” the joint statement says. “Some channels are also involved in spreading rumors about rifts between government and Army, which itself is a condemnable act,” it added.

In dirty times dirty deeds need to be done

This is not the issue of resignation , but the issue of democracy , politics and ethics . i think prime minister should not behave like child or immature person, our political system should be flexible , we should not be rigid and extremist. as we talk about imran khan and qadri , they are also playing only in a playground , politics is different from cricket . sorry to say imran sab u r only good player but not nice politician. and qadri sab ur r only rigid mulla not even religious scholar .. Sharif brothers should play mature and flexible role for the stable democratic government . people are fed up of these so called marches .