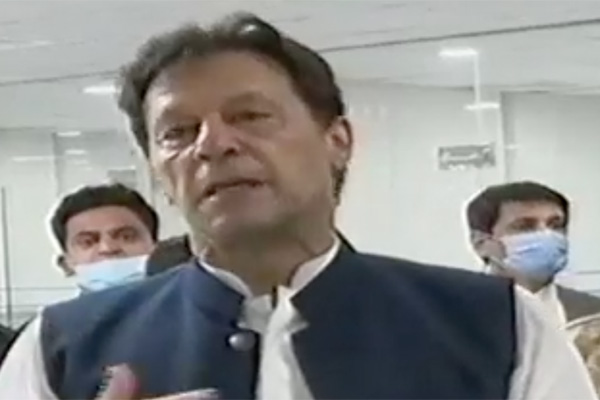 Prime Minister Imran Khan on Thursday appealed to Pakistan’s citizens to commemorate the upcoming Eidul Azha with simplicity, adding that we should strive to avoid the mistakes of Eidul Fitr, which had resulted in a dramatic surge in confirmed cases of the novel coronavirus.

Addressing media after inaugurating an Isolation Hospital and Infectious Treatment Center in Islamabad, Khan said the country had managed to reduce new cases of COVID-19 “far earlier than we had predicted,” but warned that this situation could easily reverse if people started displaying carelessness about SOPs.

“We should not repeat the mistakes of Eidul Fitr,” he said. “We showed great carelessness, we did not understand that this virus spreads quickly whenever people gather,” he said, adding that this had resulted in mass spread of the virus and increased pressure on healthcare workers and hospitals.

The prime minister said that the “smart lockdown” had yielded positive results, and claimed Pakistan’s “curve was declining.” He said the provinces had cooperated with the federal government, adding that Pakistan, compared to the rest of the world, had witnessed “very few” deaths from the virus.

Commending the completion of the Isolation Hospital in record time, Khan said important tasks such as this are achievable if you have the political will for them.

Earlier, NDMA Chairman Lt. Gen. Muhammad Afzal briefed the prime minister on the facilities available at the isolation hospital. The 250-bed medical facility was constructed in just 40 days for around Rs. 980 million.