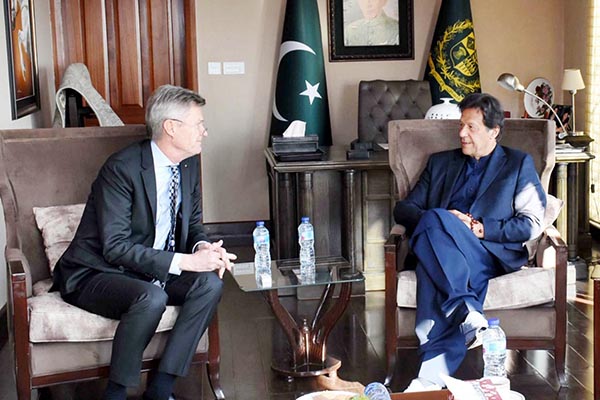 The incumbent Pakistan Tehreek-e-Insaf-led government is taking special care to monitor cross-border movement of people between Pakistan and Afghanistan to prevent the spread of the deadly poliovirus, Prime Minister Imran Khan said on Wednesday.

During a meeting in Islamabad with a high-level delegation of Rotary International led by President Holger Knaack, Khan said eradication of polio was a top priority for the government. He said the entire nation was united against polio and the government was committed to utilizing all available resources to eliminate the disease.

Lauding Rotary’s efforts against the poliovirus, the prime minister said the government valued all international organizations assisting Pakistan in its anti-polio efforts, and vowed to extend maximum support for their functioning.

Special Assistant to the P.M. on Health Dr. Zafar Mirza also briefed the meeting about the government’s efforts to eradicate polio, saying over 100,000 security officials had accompanied over 250,000 polio workers in administering the polio vaccine to around 4 million children under five years old.

The Rotary delegation lauded the anti-polio efforts of the Government of Pakistan and assured it of the best help possible.

Rotary International is a non-profit organization aimed at bringing people together from around the world to provide humanitarian services on disease, peace, clean water, sanitation, education and local economies. During its 30 years of fighting against polio, Rotary had helped reduce incidences of the virus by 99.9 percent through immunization programs that have targeted over 2.5 billion children in 122 countries. So far, Rotary has contributed over $1.8 billion toward eradicating the disease worldwide.

Currently Pakistan is one of only three countries—alongside Afghanistan and Nigeria—where polio is still endemic.

Earlier, on Tuesday, the Rotary delegation called on Pakistan Army chief Gen. Qamar Javed Bajwa. The Chief of Army Staff lauded the organization’s role in the fight against polio. He also discussed measures related to healthcare in Pakistan, and hoped that collective efforts would lead to completely rooting out the poliovirus from the country.