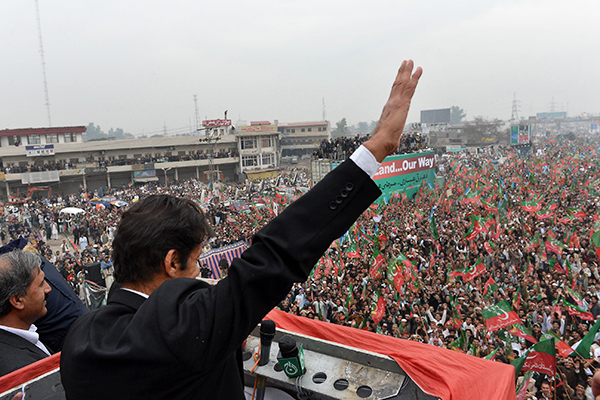 Khan called for a complete blockade of NATO convoys to Afghanistan to put pressure on the U.S. to abandon its controversial drone program. “We will not allow NATO supplies to pass [through] Khyber-Pakhtunkhwa and in any case will stop drone strikes,” he said.

Khan had earlier set Nov. 20 as the deadline for Islamabad to force an end to U.S. drone strikes failing which he had threatened to block NATO supplies through his province. On Saturday, he rolled back by stating that he would take the matter to the Supreme Court and, if necessary, to the International Court of Justice instead.

Khan also reiterated that Washington had “sabotaged” purported peace talks between Pakistan and the Pakistani Taliban by killing Hakimullah Mehsud, the mass murderer who led the local Taliban, in a drone strike on Nov. 1. Syed Munawar Hasan, Khan’s political ally who heads the Jamaat, has dubbed Mehsud a “martyr.”

NATO supplies, typically fewer over weekends in any case, were suspended through the province because of the rally on Saturday.

On Nov. 21, another drone strike killed six people, including a senior leader of the Haqqani network, in Hangu district, Khyber-Pakhtunkhwa. This was the first drone strike to technically take place outside the federally-administered tribal areas.