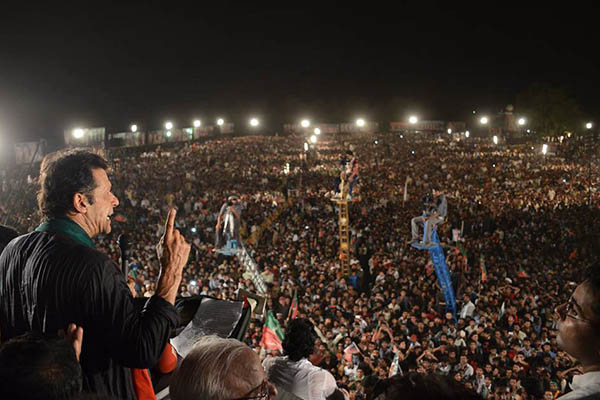 Imran Khan, chief of the Pakistan Tehreek-e-Insaf political party, declared war on the Pakistan Muslim League (Nawaz)-led government on Friday, demanding Prime Minister Nawaz Sharif respond to him by July 27 or risk a “PTI tsunami” of 1 million people in Islamabad.

Addressing supporters at a rally in Bahawalpur, Khan declared that he did not accept the results of the 2013 general elections, alleging that they were rigged in favor of the PMLN and were meaningless. The move surprised many, as Khan accepted the election results last year and is currently part of the opposition in the National Assembly. Earlier, the PTI had been demanding a recount of votes in four controversial constituencies of the National Assembly. On Friday, Khan said it was now too late too address those concerns.

“The time has come to tell the nation about the unprecedented rigging that took place on May 11,” Khan thundered to a crowd of thousands. “Our first demand: Who was involved in Nawaz Sharif declaring a victory speech on the night of May 11, 2013 before the votes had been counted?” said Khan, referring to a speech made by the prime minister to his supporters after only 15 percent of votes had been counted. “Second: What was the role of the caretaker setup, specifically Punjab chief minister Najam Sethi, in the electoral rigging that occurred. Third: What role did then-chief justice Iftikhar Chaudhry play in ensuring that the Sharifs would be elected; and fourth: why were the returning officers not subservient to the Election Commission of Pakistan?”

Khan said these questions needed to be answered or the PTI would stage a long march on Islamabad on Aug. 14, Pakistan’s independence day. “If these questions are not answered within a month [by July 27], then the government should brace for a tsunami march on Aug. 14,” he said, urging men, women and children to join him in Islamabad to “save the nation.”

Referring to the police brutality in Lahore on June 17 that left 11 people dead, Khan also warned the Punjab police from trying to stop his workers from reaching Islamabad. “Punjab police, I am warning you,” he said, “If any of you raise a hand, or a gun, against my supporters, I will hang you myself.”

Earlier, during the same speech, Khan condemned the former chief justice, saying: “How cheap are you that you were willing to sell your nation’s future for the vice-chairmanship of the Balochistan Board of Investment for your son?” he said. He also slated the Election Commission for failing to resign and demanded the entire organization be scrapped and rebuilt.

IK has gone mad in his lust for power. His followers are beginning to resent his tactics. He can’t make up his mind. Time to protest was at the time of elections and the period thereafter. Not a year later when we are in middle of a war and the new govt has taken over entirely.