Imran Khan Sworn in as Prime Minister of Pakistan 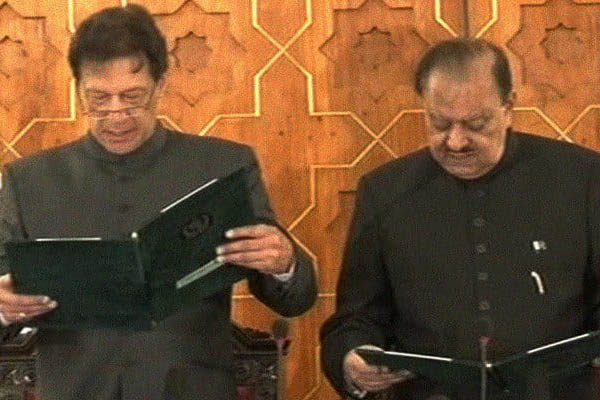 Prime Minister Imran Khan was sworn in at a ceremony in Islamabad on Saturday, officially taking over the reins of power in Pakistan after his party won elections on July 25.

The ceremony at the President’s House in the capital marks the end of decades of rotating leadership between the ousted Pakistan Muslim League (Nawaz) and the Pakistan Peoples Party (PPP), punctuated by periods of Army rule.

A tearful Khan, clad in a traditional black sherwani, smiled as he stumbled over some of the words of the oath administered to him by President Mamnoon Hussain. He swore to “bear true faith and allegiance to Pakistan,” and to “discharge my duties and perform my functions honestly, to the best of my ability… and always in the interest of the sovereignty, integrity, solidarity, well-being and prosperity of Pakistan.”

Khan’s third wife, Bushra Bibi—formerly known as Bushra Maneka—kept her eyes cast modestly downwards during the ceremony. It was her first public appearance since their wedding earlier this year, and she appeared escorted by tight security and covered from head to toe in a white niqab.

Khan, 65, was elected the day before in a confidence vote by the National Assembly and is expected to lead a coalition government. The former cricketer, who captained Pakistan to World Cup victory in 1992, fell short of an outright majority, forcing him to partner with smaller parties and independents in order to form a government.