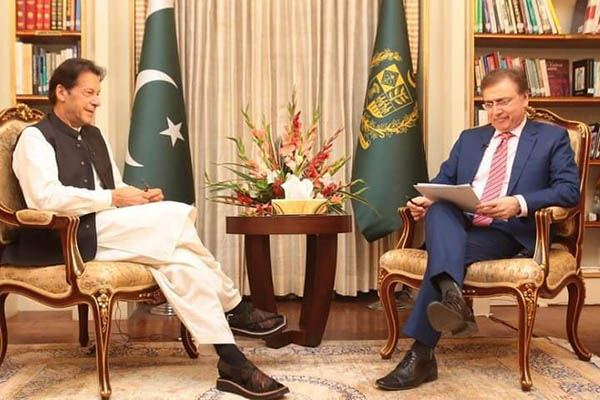 Rapists should be chemically castrated so they cannot carry out similar crimes in future, Prime Minister Imran Khan said on Monday.

“It [rape] should be graded like murder, first degree and second degree,” he told anchor Moeed Pirzada during a one-on-one interview. “Chemical castration should take place. I have been reading up on it, it happens in many countries,” he said. Referring to the motorway gang-rape of a woman in Lahore, the prime minister said it had affected the entire nation, as it could have happened to anyone’s wife, daughter or sister.

Khan said that he had been briefed on sex crimes in Pakistan upon becoming prime minister, adding police had found a dramatic rise in sexual assaults against women and children in recent years. He claimed this could only be defeated by societal efforts, and not just through policing.

“World history tells when you increase fahashi (vulgarity) in society, two things happen: sex crimes increase and the family system breaks down,” he said, claiming the divorce rate increased as did vulgarity.

Compared to the West, he said, “our family system is intact. We can fix our justice system and the institutions but if our family system breaks down, we will not be able to rebuild it.” Instead of addressing a massive uptick in reported rape cases in Pakistan in the past week alone, the premier instead insisted that New Delhi had become the “rape capital” of the world due to obscenity from Bollywood.

The prime minister said he had pushed for Turkish drama Ertuğrul to be broadcast on Pakistani television because he wanted to prove to local producers that Islamic programs fit for the whole family could be popular in Pakistan too.

“They should be hanged in public,” he said. “Because they ruin children’s lives and their parents [lives]. You don’t even know how often these cases occur as they are under-reported,” he said, but noted that this would not be “internationally acceptable” and Pakistan could lose its Generalized Scheme of Preferences (GSP) status by the European Union.

Dismissing questions on Punjab Chief Minister Usman Buzdar’s governance, the prime minister reiterated his support for the lawmaker and claimed he had a “very difficult” job. “To govern Punjab is very difficult,” he said. “The police and bureaucracy have been politicized in Punjab as only one party had been ruling the province for the past 35 years,” he added, wrongly, as the Pakistan Muslim League (Quaid) allied with his party in the province ruled it from 2003-2008.

Khan claimed that Buzdar’s primary problem was a “poor” media image because he was not “media-savvy,” and “people from within the party” who have been trying to oust him.

“What I expect from Usman Buzdar is that at the end of his tenure, poverty [in Punjab] declines,” he said, adding that the PTI government’s projects in the province were aimed to uplift the poor.

Khan also dismissed questions on frequent changes in the bureaucracy—despite claiming earlier this year that any organization that saw frequent leadership changes was doomed to fail—claiming what matters at the end of the day is whether the government has improved the common man’s life.

The prime minister also defended Lahore Capital City Police Office Umar Sheikh—who recently blamed the victim of a gang-rape for “driving late at night”—and said his appointment was needed to defeat the “land mafia” in Punjab. He was not questioned on, nor did he answer, why only Sheikh is capable of performing this job, despite mounting calls for his resignation.

Khan claimed the government would bring a new local government system in Punjab and Khyber-Pakhtunkhawa to empower people at local levels, adding these would be direct elections for district administrators.

Admitting that his government had delayed in going to the International Monetary Fund for a loan after taking power, Khan said he had hoped to secure enough funding from allied nations to avoid it. “But they were unable to… most countries don’t want to give you anything. I admit, we should have gone to IMF sooner,” he added.

The prime minister also hit out at the opposition over its refusal to back legislation that the PTI claims is required by the Financial Action Task Force (FATF). The opposition maintains it legalizes extrajudicial abductions.

“The only thing that the opposition wants is that the government lets go of their corruption cases,” claimed Khan, adding that it wanted to pressure him as it had former president Pervez Musharraf.

Reiterating that his government would never grant any kind of National Reconciliation Order, he implied that he would prefer to see the country blacklisted by the FATF rather than be “blackmailed” by the opposition.

The prime minister also discussed his government’s efforts to resolve Karachi’s municipal and infrastructure issues, claiming that the record rainfall had presented an “opportunity” to focus on the city’s many issues.

“Karachi is Pakistan’s engine of growth,” he said. “When Karachi sneezes, entire Pakistan catches a cold,” he added.

To a question on Indian P.M. Narendra Modi’s abrogation of India-held Jammu and Kashmir’s special constitutional status, Khan referred to it as a “historic blunder.” He said his government was considering how to respond to Delhi’s attempts to change the demography of the region through a domicile law and maintained that his government had successfully “internationalized” the issue.

“The U.N. has taken it up, lawmakers of various countries have talked about it,” he said, claiming that India had been unable to implement its worst abuse because of Pakistan and the world’s attention.