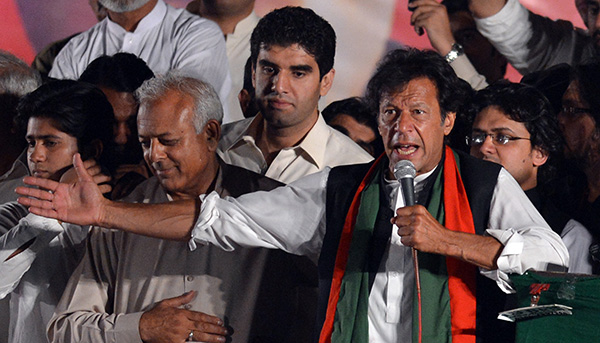 You can’t lead a revolution and hide behind bulletproof glass—at least not according to Imran Khan, wildcard contender for power at the ballot box in Pakistan on May 11.

Visibly tired by 15-hour days, frenetic flying, and driving around the country to address tens of thousands in a campaign dominated by threats and fear of attack, the cricket legend is nothing if not focused. “This is a revolution taking place,” he said after several days of hard campaigning in the Punjab, his home province and the political backbone of Pakistan, which elects a little over half the seats in the National Assembly. Khan’s Pakistan Tehreek-e-Insaf is being seen as the biggest barrier to the Punjab-based Pakistan Muslim League (Nawaz)’s return to power, propelled by an anti-incumbency fervor against President Asif Ali Zardari’s Pakistan Peoples Party.

“When I came to politics 17 years ago, I had already conquered my fear of dying because I knew I was going to challenge the status quo,” 60-year-old Khan says. But security is clearly a major preoccupation. According to Khan, he is on the “top five hit list.” He may not use the bulletproof glass screens used by other politicians at public rallies, but he travels in an armored car with police escort.

His party cancelled a rally in Karachi on Sunday after attacks on rival parties killed more than 20 people. Attacks targeting the election campaign have so far killed nearly 60 people ahead of the May 11 polls.

“We couldn’t take a risk. It’s just too dangerous. I mean you can’t risk the life of other people,” Khan said.

Khan has two sons by his ex-wife, Jemima Khan, daughter of the late billionaire James Goldsmith, but they live in Britain and he has not seen them for several months. “My older son worries. You know he worries, obviously, because when he hears what’s going on in Pakistan,” he says.

Khan and Nawaz Sharif, the two-time prime minister whose PMLN party is tipped to win, are the only two leaders addressing big rallies. The three main parties in the outgoing government (the PPP, the Muttahida Qaumi Movement, and the Awami National Party) have curtailed public gatherings in the face of direct Taliban threats.

Khan’s campaign is about mobilizing the masses, exploiting disaffection, tapping into anti-American sentiment that blames many of the country’s woes on the United States, and promising to fix a crippling power crisis.

“If my politics is different … I can’t be standing behind a bulletproof screen and connecting with the people,” he says. In fact, when he bounded up to the microphone in Sargodha, a university and garrison town in Punjab’s farm belt, he deliberately stepped in front, not behind the protective screen party workers had hauled onto the podium.

To his supporters he is the hero who led Pakistan’s cricket team to World Cup victory in 1992 and then set up the best cancer hospital in the country. He went into politics in 1996, founding his Pakistan Tehreek-e-Insaf party determined to break the stranglehold of dynastic politics. But it wasn’t until October 2011, when he attracted a crowd of more than 100,000—mostly young people, women, and middle-class voters—in his hometown of Lahore, did he emerge from celebrity lightweight into serious contender.

He claims to be leading a “tsunami” of change, promising to improve governance and education, solve the energy crisis, and balance the books by introducing tax reform and slashing expenditure. His core base is the emerging middle class, which is socially conservative. But to alarmed detractors he is deemed soft on Islamist militants and naive in his criticism of the U.S. war on Al Qaeda and the Taliban. He opposes U.S. drone strikes and calls for peace talks with the Taliban, which the government blames for killing 30,000 people over the last decade.

Although Khan believes he will be Pakistan’s next prime minister, analysts say he is more likely to secure 10-30 seats in the 342-member National Assembly—a breakthrough that could make him kingmaker of an incoming coalition. But he refuses to share power with the PPP, which led the national government for the last five years, or PMLN, which has ruled Punjab, saying that his party will go into the opposition if they do not win outright.

Scathing about Sharif and Zardari, he does, however, have words of pity for former military ruler Pervez Musharraf, who returned home last month from self-imposed exile only to be put under house arrest.

“He sent me a message once saying if he and I got together, then 95 percent of Pakistan was with us. I mean that would have been a suicide attack on my party,” he says. “Anyway, it’s something I have always had for underdogs, I feel sorry for him, although he did a lot of damage to Pakistan.”