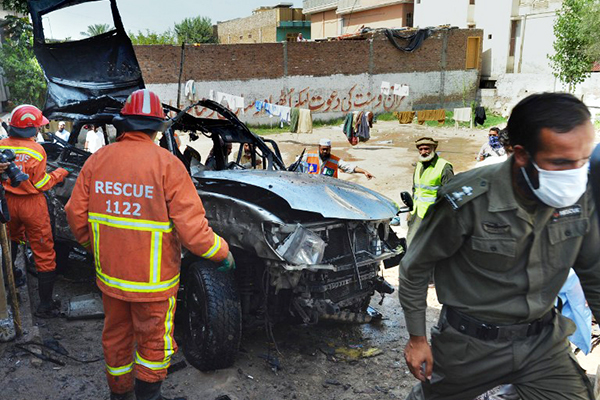 The May 24 bombing in Peshawar. A. Majeed—AFP

A car bomb aimed at a Pakistani security force convoy killed 16 people and wounded 28 others on Sunday in Badaber, near Peshawar, an official said.

The attack happened not far from the semiautonomous tribal belt where Taliban and Al Qaeda-linked groups have bases, as British Prime Minister David Cameron visited Islamabad.

“Now 16 people have died,” said Jamil Shah, spokesman for the government-run Lady Reading Hospital in Peshawar, adding that 28 were injured. At least three children were among the dead, and two children and a woman were among those hurt, he added.

Police said most of the victims were civilians because the bomb targeting the Frontier Corps’ convoy exploded in a bustling market area. “The car bomb was parked in a market packed with the general public. When the FC convoy comprising of three vehicles passed by, the bomb exploded and hit a vehicle in the convoy,” said police official Shafiullah Khan. “Many civilians were killed and wounded in the attack because there was a big rush in the market at the time.”

Javed Khan, a local administration official, told reporters that one policeman was also among the dead in Badaber, a flashpoint for violence south of Peshawar. “This is a very sad incident. There have been targeted operations in that area in the last few days and we have arrested many terrorists from that area,” Khan said.

Shops and cars were also damaged in the attack. Pieces of human flesh, broken glass, lost shoes, and vegetables from nearby carts were flung across the scene, and the seats of damaged cars were stained with blood.

It was not immediately clear whether anyone from the paramilitary Frontier Corps had been killed. “So far, we have reports that two Frontier Corps soldiers have been injured. We don’t know about any other losses,” a military official said on condition of anonymity.

Pakistan is on the frontline of the U.S.-led war against Al Qaeda, and terror plots against the West have been hatched in its semiautonomous tribal belt. Pakistani troops have for years been fighting homegrown militants in the northwest.

Speaking in Islamabad, Cameron said the battle against terrorism needed “a tough and uncompromising security response” as well as investment in education and tackling poverty.

Pakistani Prime Minister Nawaz Sharif condemned the attack. “Pakistan has suffered the most in terms of human and financial losses. We are, therefore, resolved to tackle the menace of extremism and terrorism with renewed vigor and close cooperation with our friends,” he said after his talks with Cameron.

On June 22 gunmen shot dead 10 foreign tourists and a Pakistani guide in an unprecedented attack at a remote base camp in the Himalayas that was claimed by Pakistan’s umbrella Taliban faction. One was an American with dual Chinese citizenship, three came from the Ukraine, two from Slovakia, two others from China, one from Lithuania, and one from Nepal.

As a result Pakistan suspended expeditions on its second highest peak, Nanga Parbat, and the tiny tourist industry built around natural beauty and mountaineering opportunities is set to collapse. Pakistan’s umbrella Taliban movement claimed responsibility on behalf of Junood ul-Hafsa, a new faction it said had been set up to kill foreigners to avenge U.S. drone strikes against Taliban and Al Qaeda operatives in the tribal belt.

Pakistan’s government, which took office in June, faces a massive array of problems including a moribund economy and Islamist militancy. Sharif has previously advocated peace talks with the Taliban and criticized drone strikes, echoing long-held complaints that the U.S. campaign violates national sovereignty.