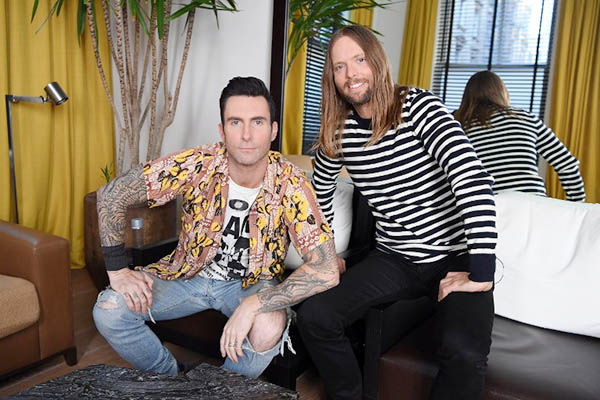 Tensions may be mounting dangerously around the world but for Maroon 5, this isn’t the time for protest songs—it’s time to dance.

The chart-topping pop-rockers on Friday release their sixth studio album, Red Pill Blues, a collection of toe tapping, funk-inflected tracks that mine the emotional drama of human relationships.

Frontman Adam Levine, whose ever-impressive falsetto again powers much of the music, was unapologetic about not joining the growing number of pop stars who are getting political on their 2017 albums, saying he can count on one hand the number of protest songs he found successful. “I can tell you right now that every songwriter that just sat down and said, ‘I’m going to write a song that is going to change the world,’ probably did not do that,” Levine, lounging deeply in his chair, told AFP in a New York hotel suite.

The 38-year-old singer—who has become an even bigger presence in U.S. pop culture as a coach on television talent show The Voice—is not afraid of expressing his political views, which lean left. He has taken to social media to criticize President Donald Trump and has been a longtime champion of gay rights. But he said: “Sometimes people trivialize the existence of pop music a lot by saying, ‘It’s stupid, let’s write a protest song.’ But that’s an extremely narrow-minded way to look at it. I think that pop music has a level of sophistication that sometimes goes undetected.”

“Releasing the right kind of songs at the right times is an extremely important and underappreciated art form,” Levine said, adding after a short pause: “In my humble opinion.”

Red Pill Blues through its title offers subtle commentary on the current moment. The imagery comes from sci-fi cult classic The Matrix, whose protagonist is offered a choice between the “red pill” of knowledge and the “blue pill” of ignorance. People today are “reluctantly informed—sometimes incorrectly informed—but I think there is a lot of reality rearing its ugly head,” Levine said.

The album marks a further push into studio effects by Maroon 5, who achieved global triumphs with soulish soft pop songs such as “She Will Be Loved” and energetic dance numbers such as “Moves Like Jagger.” On Red Pill Blues, Maroon 5 lets minimal if melodic keyboards take the lead on tracks such as “Best 4 U,” “Plastic Rose” and the early singles “Don’t Wanna Know” and “What Lovers Do.”

The album also sees Maroon 5 collaborating with top stars of the moment, including rappers Kendrick Lamar and Future and singers SZA and Julia Michaels.

Guitarist James Valentine said Maroon 5 had less time to work together in the studio owing to Levine’s schedule on The Voice but that the band saw the upsides of modern recording techniques, in which songs are shared with contributors by electronic files. “We would get bored if we tried to make Songs About Jane six times,” Valentine said, referring to the group’s 2002 debut album. “So we’re always trying to mix it up.”

Levine sings on most tracks of love past and present but said he was careful not to make the lyrics overly personal. “I don’t want to make a record full of songs that say my problems are what really matters and how people feel about me is the most important,” he said. “It’s almost like there has to be some sort of reflection of collective experience in your music—‘I hurt you, you hurt me, we hurt each other.’ That’s a universal pop theme.”