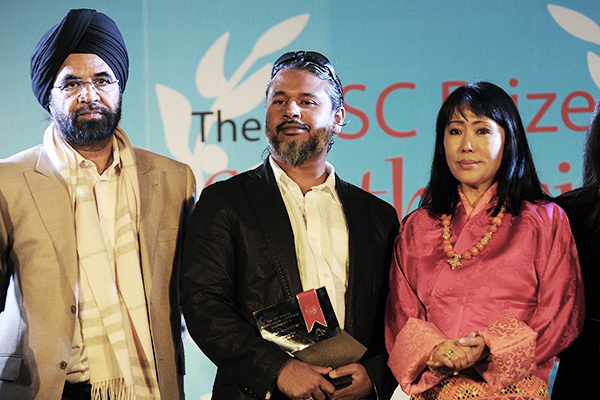 Five-member panel will unveil long-list of books on Oct. 20.

The organizers of the annual DSC Prize for South Asian Literature have announced the international jury that will pick the winner for 2015.

The five-member jury comprises Indian writer and poet Keki N. Daruwalla as jury chairman; literary critic and former Granta editor John Freeman; Maithree Wickramasinghe, who teaches at the University of Kelaniya, Sri Lanka, and at the University of Sussex; Michael Worton, professor emeritus at the University College London who has written on modern literature and art; and Razi Ahmed, the founding chairman of the annual Lahore Literary Festival (LLF).

The jury will announce the long-list of between 12 and 15 books—from the 75 under consideration for the 2015 DSC Prize—on Oct. 20 in New Delhi. The short-list of five to six books will be announced on Nov. 27 in London. The winner of the $50,000-prize will be named on Jan. 22 at next year’s Jaipur Literature Festival.

Surina Narula instituted the DSC Prize in 2010. The prize is sponsored by her DSC Group, an Indian conglomerate, with the aim of developing society through the promotion of literature. DSC also sponsors the Jaipur Literature Festival.

The DSC Prize celebrates the South Asian region and aims to raise awareness of South Asian culture around the world through literature. Books submitted for judging must pertain to the South Asian region in terms of content and theme, according to the organization’s website. Only full-length fiction of at least 25,000 words—including novels, novellas and theme-bound short-story collections—written in or translated into English is eligible.

The inaugural 2011 DSC Prize was awarded to Pakistan’s H. M. Naqvi for Home Boy. The 2012 Prize went to Singapore-based Sri Lankan Shehan Karunatilaka for Chinaman. In 2013, Indian author Jeet Thayil won for Narcopolis. And this year’s winner was India’s Cyrus Mistry for Chronicle of a Corpse Bearer.