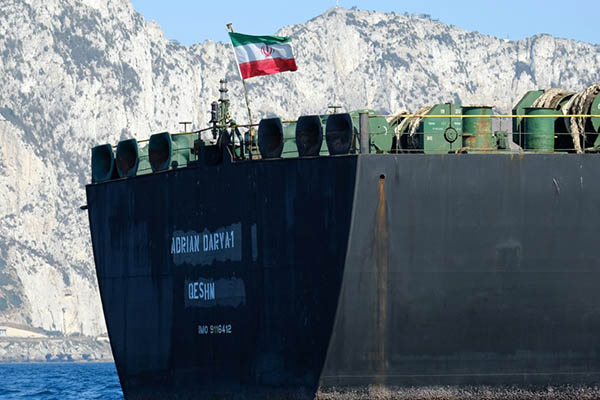 The incident occurred while the tanker was near the coast of Saudi Arabia, with oil leaking into the Red Sea

Suspected missile strikes hit an Iranian oil tanker near the Saudi coast on Friday, its owner said, the first Iranian vessel targeted since a spate of attacks in the Gulf Washington blamed on Tehran.

The National Iranian Tanker Company, which owns the ship, said the hull of the Sabiti was hit by two separate explosions off the Saudi coast, saying they were “probably caused by missile strikes.” The news sent Brent surging 2.3 percent to $60.46, while West Texas Intermediate jumped 2.1 percent to $54.69. Prices had already been rising on growing hopes for a breakthrough in the China-U.S. trade talks.

The blasts come just weeks after two of Saudi Arabia’s biggest oil installations were hit, wiping out five percent of global production. The National Iranian Tanker Company said the hull of the vessel was hit by two separate explosions about 100 kilometers off the Saudi coast. “All the ship’s crew are safe and the ship is stable too,” NITC said, adding those on board were trying to repair the damage.

Oil was leaking from the tanker into the Red Sea off the major Saudi port of Jeddah. The state-owned company said that contrary to reports, “there is no fire aboard the ship and the ship is completely stable.”

According to Iranian state television, the blasts could have been the result of a “terrorist attack.”

There was confusion about the name of the vessel involved. TankerTrackers, a site that monitors maritime traffic, identified the ship as the Sinopa.

It comes after a spate of still unexplained attacks on shipping in and around the vital seaway to the Gulf involving and Western powers. Washington accused Tehran of attacking the vessels with mines, something it strongly denied.

There have also been seizures of both Iranian and Western-flagged vessels and twin attacks claimed by Yemeni rebels allied with Iran on key Saudi oil infrastructure. Both Washington and Riyadh blamed Tehran for those attacks. Iran again denied any role.

The United States has since formed a naval coalition to escort commercial vessels through the strategic Strait of Hormuz. It has been joined by Australia, Bahrain, Britain, Saudi Arabia and the United Arab Emirates.

Friday’s incident is the first involving an Iranian ship since the “Happiness 1” broke down at about the same location in early May. That ship was repaired in Saudi Arabia and held in the kingdom until July 21 when it was released.

Saudi Arabia severed diplomatic ties with Iran in 2016, after its missions in the country were attacked in demonstrations over the Sunni-ruled kingdom’s execution of prominent Shia cleric Nimr al-Nimr. They still lack direct diplomatic channels, and Iranian foreign ministry spokesman Abbas Mousavi in July thanked “Switzerland and Oman as well as related Saudi parties for offering services and facilities” to resolve the issue.

Iran has been locked in a standoff with the United States and its Gulf Arab allies since U.S. President Donald Trump withdrew from a 2015 deal that gave it relief from sanctions in return for curbs on its nuclear program.

The British-flagged oil tanker Stena Impero arrived in Dubai on Saturday, after being detained with its crew in Iran for more than two months. Iran’s Revolutionary Guards seized the vessel in the Strait of Hormuz on July 19 and then impounded it off the Iranian port of Bandar Abbas for allegedly failing to respond to distress calls and turning off its transponder after hitting a fishing boat.

But the seizure was widely seen as a tit-for-tat move after authorities in the British overseas territory of Gibraltar detained an Iranian tanker on suspicion it was shipping oil to Syria in breach of E.U. sanctions. Tehran repeatedly denied the cases were related.

At the height of the crisis, Trump ordered retaliatory strikes against Iran after the Islamic republic downed a U.S. drone but called them off at the last minute.