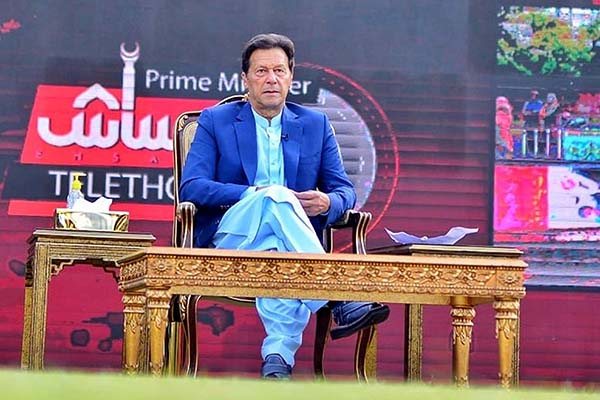 Participating in a massive telethon to collect funds for Pakistan’s fight against COVID-19, Prime Minister Imran Khan on Thursday told participating journalists that the government was utilizing technology developed by the Inter-Services Intelligence (ISI) to trace suspected patients.

“The government is using a system originally designed [by the ISI] to trace terrorists to find suspected coronavirus cases,” he said during the live transmission, which lasted for around three-and-a-half hours and was simultaneously broadcast on several TV channels and online portals. “Tracking and testing of patients is the only way to reopen businesses,” he added, while urging the nation to unite in the fight to curb the spread of COVID-19.

Throughout the event, celebrities, overseas Pakistanis, businessmen and philanthropists called in to pledge donations for the government’s Ehsaas program. According to Senator Faisal Javed Khan, the government collected Rs. 550 million during the telethon, bringing to Rs. 2.765 billion the total amount thus far collected in the P.M.’s Relief Fund for COVID-19.

The prime minister said that indefinite lockdowns only favored the elite and the government’s decision-making process needed to factor in the impoverished struggling to secure essential items during the current economic downturn. “The country has to move toward a ‘smart lockdown’ that balances keeping people safe and ensuring the coronavirus does not spread,” he said, without clarifying what that would entail.

Referring to a conversation with U.S. President Donald Trump, Khan said that despite America’s resources, even Trump was concerned about its economy collapsing. “Everyone agrees it [lockdown] is unsustainable,” he said, adding that everyone must adjust according to ground realities.

The prime minister assured prospective donors that their charity would be disbursed in a transparent manner and would help only those most in need.

To a question on whether he would join hands with opposition parties for fundraising, Khan quipped that he was afraid that if they joined him “donations would drop.” He said he could not work with his political rivals until they brought back “looted money.” Despite this, he urged all political parties to join the government in helping overcome this crisis.

“The government lacks the capacity to handle this situation; the whole nation has to take responsibility for overcoming it,” said Khan. “When you go to a mosque, you must understand that it involves risk to your life and others as well,” he added. He advised people against assuming Pakistanis had “stronger immunity to the virus,” urging them to exercise all precautions advised by doctors.

The prime minister said the government had announced its Rs. 144 billion Ehsaas Emergency Cash Scheme to support around 12 million families in a transparent and apolitical manner, adding the bulk of its disbursal had thus far gone to opposition-led Sindh province, proving it was not bound by politics.

Khan warned the economic impact of the pandemic would increase in future as people started to exhaust their savings. He said the government had already started reopening some industries, including the construction industry, to help the impoverished secure employment.

According to Khan, the government is expecting coronavirus cases in Pakistan to hit 15,000 by next week, and there are indications the second half of May could pose a challenge for the country’s hospitals.

To a question, he said the government was aware of the difficulties being faced by overseas Pakistanis and was developing a strategy for their repatriation in line with the quarantine facilities available in the country.

The telethon was hosted by Senator Faisal Javed Khan and included representation from all partnered media groups, including Geo News, ARY News, Samaa News, Dunya News, Bol News, Hum News, PTV News, Express News, and 92 News. Anyone who wishes to donate to the P.M.’s Relief Fund can do so by depositing funds to National Bank of Pakistan Account Number 4162786786.