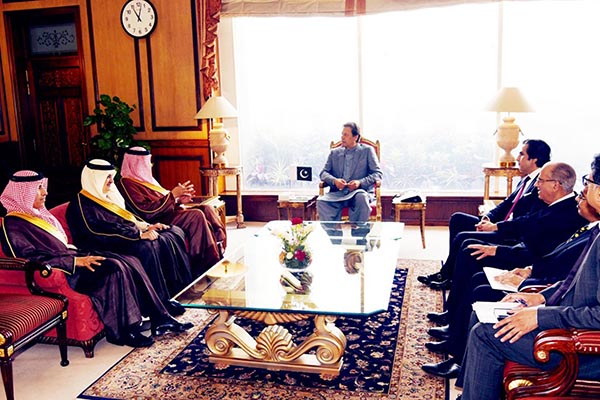 Prime Minister Imran Khan on Tuesday stressed the importance of formulating a counter-narrative to Islamophobia during a meeting with Saudi Prince Sultan bin Salman bin Abdulaziz al-Saud in Islamabad.

The younger generations should be engaged to spread positive messaging about Islam, said Khan, adding there should be emphasis on enhancing their pride in the history and achievements of Islamic civilization. The Saudi prince agreed with the prime minister, saying the Islamic Ummah needed to improve their understanding of the religion’s cultural and religious heritage, and must project it to remove misperceptions about Islam.

During the meeting, Khan also praised the “unique” ties between the Gulf kingdom and Islamabad, noting they were based on shared religion, culture and history. Prince Sultan, meanwhile, appreciated the role played by Pakistani professionals, especially doctors and engineers, in the progress and development of Saudi Arabia.

The prime minister expressed gratitude for Saudi Arabia’s economic support to Pakistan, and hailed the agreements and initiatives underway to build a stronger economic partnership between the two nations.

The cricketer-turned-prime minister also highlighted the tourism and economic potential of Pakistan and detailed the macroeconomic improvements achieved by his Pakistan Tehreek-e-Insaf-led government, including the current account surplus achieved for the first time in four years.

Khan also urged Saudi Arabia to unite with Pakistan and encourage the international community to support the residents of India-held Kashmir in their “just struggle” against New Delhi’s rule. He claimed Indian forced were committing gross human rights violations in the part of Kashmir under their control and highlighting the inhuman lockdown of over eight million people that has now lasted for well over 100 days.