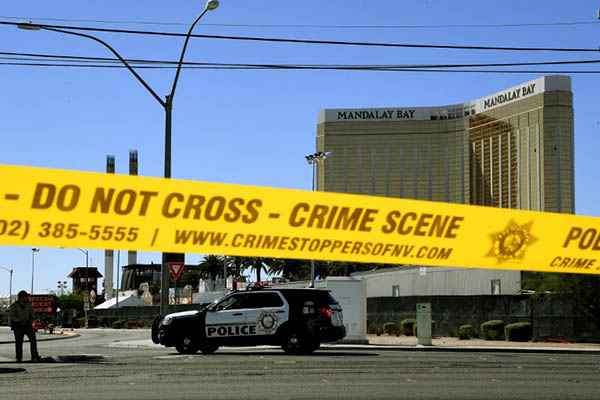 The Islamic State group claimed on Monday that the shooting massacre in Las Vegas was carried out by one of its “soldiers” who had “converted to Islam” months ago.

“The executor of the Las Vegas attack is a soldier of the Islamic State and he carried out the operation as a response” to calls to target countries fighting the jihadists, Islamic State’s propaganda outlet Amaq said on the Telegram online messaging service. It dubbed 64-year-old Stephen Paddock, who shot dead at least 58 people from a high-rise hotel window on the Las Vegas Strip, a “soldier of the caliphate” with the nom de guerre Abu Abdel Bar al-Amriki.

“The author of the Las Vegas attack converted to Islam a few months ago,” Amaq said in a series of messages. “From a hotel overlooking a music concert, [Paddock] opened fire on one of the groups, leaving 600 dead or injured, until using up his ammunition and becoming a martyr.”

The group provided no evidence to back up its claims, and U.S. security officials remained cautious amid no other signs to connect Paddock to the jihadists.

Early in their investigation police said they had no information to link him with international terror groups. In response to a query, Central Intelligence Agency spokesman Jonathan Liu said they were aware of the Islamic State claim. “We advise caution on jumping to conclusions before the facts are in,” Liu said.

Islamic State has moved quickly to claim credit for a number of recent attacks around the world, suggesting the “soldiers” were acting under their inspiration.

However, said Lorenzo Vidino, director of the Program on Extremism at George Washington University, they have also made a number of false claims, including that they were behind a robbery in a Manila casino in June, and what turned out to be a neo-Nazi attack on a Russian FSB intelligence service office in Khabarovsk in April. “Especially recently, they have claimed responsibility for very random stuff that they had nothing to do with,” Vidino said. “For a long time they have embellished real events. They twist the foundation of truth.”

Such claims have gained pace as Islamic State finds its hold on its “caliphate” territory in Iraq and Syria greatly shrunk in the face of U.S.-guided coalition assaults.

Almost fully expelled from their one-time bastion in Raqa, Syria, coalition leaders say they are preparing for a final siege against the remnants of the jihadist army in the Middle Euphrates River Valley spanning Syria and Iraq. On Friday Islamic State released an audio recording of what it said was its leader Abu Bakr al-Baghdadi calling on jihadists in Syria and Iraq to “resist” their enemies.

That was seen as a move to boost the morale of its fighters in Syria and Iraq.

Even if the group is defeated in its base area, anti-terror experts say they do not expect that will end its global reach. Despite their battlefield losses, “the ISIS ability to reach globally is still largely intact,” Nick Rasmussen, director of the U.S. National Counterterrorism Center, said last week.

On Sunday the group claimed responsibility for an attack in Marseille, France where a young man stabbed two women to death before he was shot by security officials. But by Monday afternoon it had not claimed the attack in Edmonton, Canada, in which a Somali refugee attacked a policeman on Saturday with a knife and then hit four people with a truck.