It’s Too Late for Talk 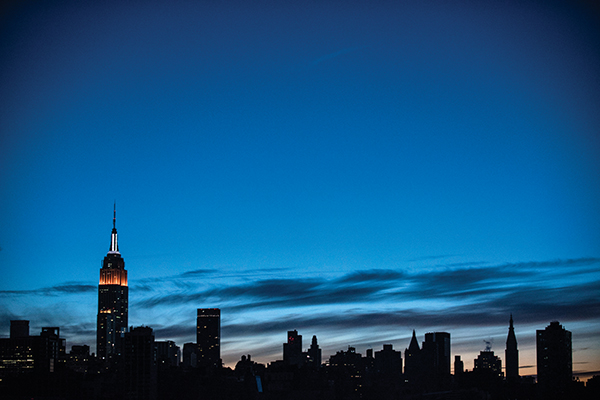 If the stylish brilliance of recent novels by Rachel Kushner, Jess Walter, and Peter Heller has been hinting at a new golden age of American prose, then David Gilbert’s ambitious, sprawling, and altogether masterful second novel, & Sons, confirms it.

There it is: a lead-in as straightforward and declarative as any you’ll come across. (I’ve even provided italics so the sedulous publicists at Random House need not skim further for their pull quote.) Why? Because Gilbert’s novel itself is by turns challenging and multilayered, weird and hilarious, dazzling and flawed, and attempting to sort it out in a critical light will take a little time. But hang with me, because & Sons is more than worth the effort.

If the structure of most novels is arc-shaped, & Sons is a chaotic circle. Reading it, I kept envisioning one of those many-laned Parisian roundabouts, with the characters as cars, futilely weaving every which way under the long shadow of the ancient obelisk in the center—in this case a famous and reclusive New York novelist named A. N. Dyer. Suddenly reminded of his mortality after suffering a breakdown at the funeral of his best friend, Charles Topping, the great author reaches out to his three wayward sons in an attempt to reunite his broken family for the first time in  several decades.

Dyer’s two oldest sons carry the scars and resentments of their father’s longtime neglect. Richard, a former drug addict with still lingering anger-management issues, has become an “addiction counselor” at Promises in L.A. Fifteen years sober, he has married one of his patients (a former meth head named Candie), and together they have two teenage children—neither of whom have met their famous grandfather. This being Hollywood, Richard also writes screenplays, and after years of failure he is elated when a division of Sony Pictures expresses interest in his latest script. But toward the end of a dreamlike meeting with a famous actor and the head of the studio, the truth emerges (at least to the reader; Richard is more credulous). What they’re really after is Ampersand, A. N. Dyer’s first and most famous novel. If Richard can convince his old man to give up the closely held film rights to this Salinger-esque American classic, well …

Richard’s younger brother Jamie exists in a different cycle of familial torment. Thoughtful, artistic, and obsessed with guilt (he lives off the family trust, which Richard has stubbornly rebuffed) Jamie travels the world filming its horrors and disasters, but then does nothing with the footage. Only a macabre, snuff-like documentary project that he shoots at the request of his dying (and then dead) ex-girlfriend ever sees the light of day, mistakenly becoming a YouTube sensation just as Jamie arrives back home.

The brothers find their once-mythic father in woeful shape, shuffling to and from his study half lucid and addicted to Vicodin. But almost more worrying is the elder Dyer’s obsession with his much younger third son, Andy, the (supposed) product of an affair that ended the author’s longstanding union with his wife, Isabel. The word “supposed,” of course, supposes secrets, of which there are plenty, and here is where & Sons gets tricky. The book is narrated by Charles Topping’s chinless, almost pitiful, son Phillip, whose unreliability is evident from the first pages. It doesn’t take an MFA student to realize Phillip isn’t present to witness most of the scenes he’s reporting on, though for good measure he lets us know anyway: “Before charges of narrative fraud are flung in my direction, let me defend myself and tell you that A. N. Dyer often used my father in his fiction.” These words will prove prophetic in more ways than one (and Phillip will progress from a harmless interloper to someone far more destructive), but they also speak to one of the novel’s great themes, the interplay—the enduring struggle—between fiction and reality. History hangs heavy in these pages, and almost every character in Gilbert’s novel is trying, sometimes literally, to rewrite it.

& Sons examines the importance of family and the vagaries of art, but it is also a book about place—specifically New York, specifically the Upper East Side of New York, and the (not so) genteel families that still endure within its stately borders. The grand institutions of that world—the hotels, churches, and museums—play host to scenes that often last a dozen or more pages. Two of them (a book party at the Frick, and a mad dash around the Met) are absolutely remarkable, but taken as a whole, these set pieces, rolling out one after another, are not unlike a long tour of these cultural palaces themselves; your mind can begin to wander. And more than once it feels like Gilbert has wedged favored memories from his own New York youth into an already-crowded narrative. In the larger scheme of this large book, however, these are mere quibbles, and the consistently high quality of the prose itself—both deceivingly casual and perfectly precise—more than saves the day. Here is Gilbert describing the publishing crowd gathered for the book party at the Frick:

All of them had gone to nifty schools; all of them had chosen the love of books over straight commerce; and all of them realized, as every year their horizon grew shorter, not the mistake they had made, no—yes please to the sliced filet on French bread with triple grain mustard—but the miscalculation in terms of their place within the transit of passing times. Publishing would survive, they all agreed. It’s not as if people were going to stop reading books. But then a stumped pause would follow as though they had been handed two pieces of wood and told to make a fire. Better to shrug and grab the last scallop ceviche served in a delightful faux ice-cream cone.

Gilbert is obviously a product of the uptown world he has created, but & Sons is hardly a Louis Auchincloss-like portrait of patrician wealth and high society. Money is not the focus of these pages, though of course it lurks in the background. The Fifth Avenue apartments, the private schools (almost every male in the book went to Exeter), the summer homes in Litchfield and Bellport, these are all a part of the Dyer-Topping social swirl, and yet it is blueblood repression, not old-world wealth, that consumes Gilbert’s characters. The irony at the heart of the novel is A. N. Dyer’s inability to communicate off the page—the great wordsmith of his age rendered mute and ineffectual in the actual world. & Sons contains so many poignant passages about family relations (and the lack thereof), that I almost wore out my pen highlighting them:

A brief silence followed, everyone smiling with no direction, one of those awkward moments where families realize they are essentially a collection of strangers with a few things in common…

Thank goodness [Charles] met someone like my mother, who could push him forward with gentle purpose, like an usher seating a latecomer in the dark. For her a successful life was hard work, and by the time she met my father she was done with passion. Still, she created a tremendous amount of beauty with a cold heart.

I could go on and on. Gilbert certainly does. & Sons comes in at almost 450 pages, but I still can’t decide if the novel is too long or too short. He’s attempting so much—Ampersand, for instance, becomes not just a novel within a novel, but a devastating second storyline, involving the decades-old friendship between A. N. Dyer and his deceased friend—that some of it is bound to fall flat. But the great majority of & Sons soars with rare elegance and hard-won truth. It is the most modern old-world novel I have yet read, and so too among the best.