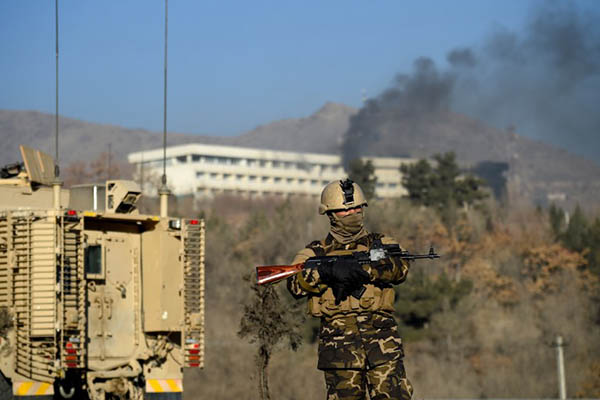 Gunmen and suicide bombers launched a pre-dawn attack claimed by the Islamic State group on a military compound in Kabul on Monday, killing 11 soldiers in the third major assault in the Afghan capital in recent days.

The series of assaults, including one of the deadliest bombs in Kabul in recent years, have left already war-weary citizens grief-stricken and angry as the Taliban and I.S. escalate their offensives.

Monday’s attack on an Afghan army battalion killed at least 11 soldiers and wounded 16, a defense ministry spokesman said. “Two bombers detonated themselves and two were killed by our forces and one was detained alive,” the spokesman, Dawlat Waziri, told AFP, adding that the attack was over.

Officials said the men, armed with a rocket, two Kalashnikovs and at least one suicide vest, had attempted to breach an army battalion near the Marshal Fahim military academy, where high-ranking officers are trained. An officer at the academy told AFP he could hear an explosion and gunfire, while other witnesses said the first blasts and gunfire came around 5:00 a.m.

The gunmen did not enter the heavily fortified compound on the western outskirts of the city, an Afghan security source said. Security forces have swarmed into the area and blocked roads leading to it.

In October, a Taliban suicide bomber killed 15 Afghan army trainees as they traveled home from the Marshal Fahim academy.

Militants including the Taliban and I.S. have stepped up their attacks on beleaguered Afghan troops and police in recent months, sapping morale already hit by desertions and corruption. Afghan troops have taken what the U.N. describes as “shocking” casualties since international forces ended their combat role at the end of 2014, though troop casualty figures are no longer released.

In comments following the latest bloodshed, U.S. President Donald Trump ruled out talks with the Taliban in the near future. Speaking to U.N. Security Council ambassadors at the White House, Trump threw into question Washington’s strategy of pushing the group toward the negotiating table. “I don’t think we are prepared to talk right now,” he said.

Last Saturday a Taliban suicide attacker driving an explosives-packed ambulance blew it up in a crowded area of the capital, killing at least 103 people—mainly civilians—and wounding 235 in one of the worst bombings in the city in recent years. The blast was a chilling demonstration of the militants’ ability to penetrate the heart of Kabul despite stepped-up security since a massive truck bomb killed some 150 people and wounded hundreds last May.

The government has blamed Saturday’s attack, which was followed by a national day of mourning, on the Taliban-affiliated Haqqani Network. Afghans flooded social media with grief and anger. “May God destroy their houses,” Kabul resident Aftab Ali wrote on Facebook, adding: “[T]hey are killing innocent humans.”

On Jan. 20 Taliban fighters stormed Kabul’s landmark Intercontinental hotel and killed at least 25 people, the majority of them foreigners, in an assault lasting more than 12 hours. But there is still confusion over the true toll from that attack, with conflicting figures given by officials and Afghan media reporting higher numbers.

Kabul remains on high alert as the city braces for further violence. On Sunday, usually a working day, the capital was unusually quiet, while Monday was a national holiday.

Security warnings sent to foreigners in recent days said I.S. militants were planning to attack supermarkets, hotels and shops frequented by foreigners. Several foreign organizations, including humanitarian groups, are reassessing their operations after a particularly deadly week in the country.

I.S. fighters also attacked Save the Children’s office in Afghanistan’s east on Wednesday. Five people were killed and 26 wounded while the organization was forced to suspend operations across the country.