Keeping the Faith in Bannu 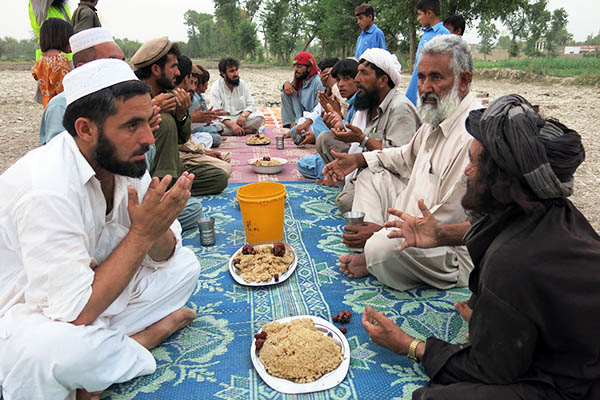 Displaced tribesmen worry about fasting during Ramzan as the military’s Operation Zarb-a-Azb continues in North Waziristan.

For half a million Pakistanis displaced by a military offensive, the prospect of fasting during the month of Ramzan amid severe food shortages has sharpened anger toward the government.

The military began long-anticipated strikes on North Waziristan in mid-June, hoping for a swift victory over a resurgent Taliban in the aftermath of a bloody attack on the country’s busiest airport in Karachi.

Far from the comforts of home in their cool mountainous district, many displaced people are facing up to life in tent villages a few kilometers east of the region’s border. Temperatures approach 50C and riots frequently break out over the lack of food supplies.

At a food distribution point in Bannu, Niaz Wali Khan, a 55-year-old pharmacy owner, said he had been queuing for four days but was turned away without rations each time. “We are depressed over the role of the military who are responsible for our suffering,” said Khan. “They have launched this operation just before the holy month, but these militants were living here for years. Why now?”

But Khan vowed to adhere to the month of fasting required of observant Muslims, which began on Sunday in parts of Pakistan and Monday in others—despite the hurdles. “We are facing extreme difficulties after the displacement but I will be fasting with a hope that God will solve our problems,” he said.

Others were less confident they would meet the challenge. “We have spent all our money paying to rent vehicles to get here and for accommodation. Now it seems we will only have water left to break our fasts,” said 43-year-old Jalat Khan, who was also standing in line.

In addition to shunning food and water from dawn till dusk, many offer special prayers during the evening that require several hours to complete. “For me, it will be difficult to take care of my prayers in this homelessness,” said Jalat, echoing several others in the same predicament.

Some doubted they would be able to complete the fast at all, which is mandatory for healthy adult Muslims, barring exemptions during travel, menstruation and pregnancy. Taxi driver Shakeeb Ur Rehman, 40, said: “My house has been bulldozed by the military and my car was destroyed in a bombing. I’m homeless and seriously worried about fasting in this hot weather. I think religious scholars should issue a decree allowing us to be exempt.”

Despite the misery, some were hopeful that Ramzan would still bring blessings. Muhammad Aziz, a 31-year-old laborer, lost track of four of his nine children on the two-day trek undertaken by thousands who fled his village to a camp in Bannu. “It was a dark day for me and my wife would not stop crying for four days,” said Aziz. But on the fifth day, his prayers were answered when his children were found by a relative and came home.

His family’s joy was soon compounded when his wife gave birth to a healthy baby boy—whom they named Azb Khan, after the sword used by Islam’s Prophet, which is also the name of the ongoing military offensive.

“This word will remind me of the sufferings we passed through and the happiness of his birth,” said Aziz.