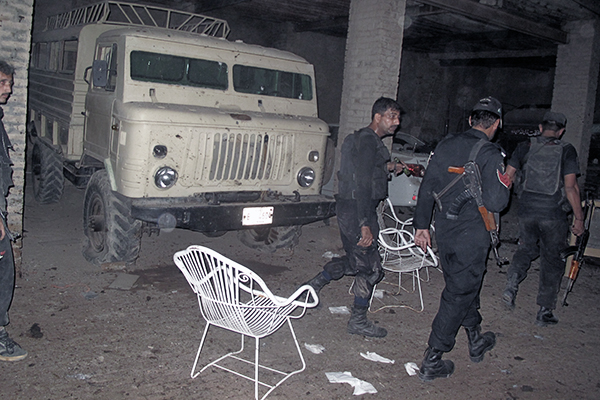 The site of the suicide attack on law minister Gandapur, Oct. 16. AFP

A suicide bomber assassinated Khyber-Pakhtunkhwa province’s law minister, Sardar Israr Ullah Gandapur, at his home near Dera Ismail Khan on Eid day, Wednesday. At least seven others were also killed and over 25 wounded in the attack.

Gandapur was meeting with constituents in his home village of Kulachi when the bomber struck, said provincial health minister Shaukat Yousafzai, adding that the suicide bomber had managed to break into the area despite “very tight security” after shooting a policeman outside.

The attack involved 8-10 kilograms of locally-made explosives, said Inayat Ullah, a bomb-disposal expert. “We have recovered two legs of the bomber,” he added.

The attack has been claimed by the Ansar ul Mujahideen militant group. “It was revenge for the martyrdom of some of our mujahideen,” Abu Baseer, a spokesman for the group said, referring to the killing of militants during a daring jailbreak in July.

Gandapur won his seat as an independent candidate from Kulachi on May 11. He later joined cricketer-turned-politician Imran Khan’s Pakistan Tehreek-e-Insaf party, which finished third in the national polls held in May but won power in Khyber-Pakhtunkhwa.

Gandapur is the third lawmaker from the province to have been killed since the elections. Farid Khan and Imran Khan Mohmand, killed in separate attacks in June, were also members of the PTI, which continues to insist on peace talks with the militants.

“Shocked and saddened by attack,” PTI chief Khan tweeted. “I feel devastated over the martyrdom of Israr Gandapur … Still stunned.” He wrote that he last met Gandapur on Sunday in Peshawar at the Peace Cricket Match. “My prayers go out to Israr’s wife, two children and parents; and to the families of all the other victims.”

Khan took the opportunity to slam the federal government of Prime Minister Nawaz Sharif for stalling on peace talks with the Taliban and their associates following an all-parties conference which endorsed the initiative. “It is imperative the [federal] government move forward to implement political consensus arrived at [the] APC. [Khyber-Pakhtunkhwa] people and government are frontline targets,” he wrote. “We must ask the government why it has drifted into inaction after the APC instead of moving forward resolutely with a consensual political mandate?”

Pakistani Taliban leader Hakimullah Mehsud last week said he was still open to peace talks, but that the government has not taken any serious steps to start dialogue. Mehsud, who has a $5 million U.S. government bounty on his head, said he would continue to target the U.S. and its allies and reiterated the demand that any ceasefire must include an end to U.S. drone strikes. His Tehreek-e-Taliban faction has demanded a government ceasefire, withdrawal of troops from the tribal areas, and the release of Taliban prisoners as preconditions for talks.

But ongoing violence, including a recent wave of bombings in Peshawar, the provincial capital, that killed more than 140 people within a week, has prompted many to question the proposed negotiations.

Why must you sensationalize this news bit with such a photograph. I expect better from newsweek.

World must take lesson that whenever there is peace talk with Taliban(violent animals) other side gets betrayed & suffers. Talks can happen only with reasonable humans.