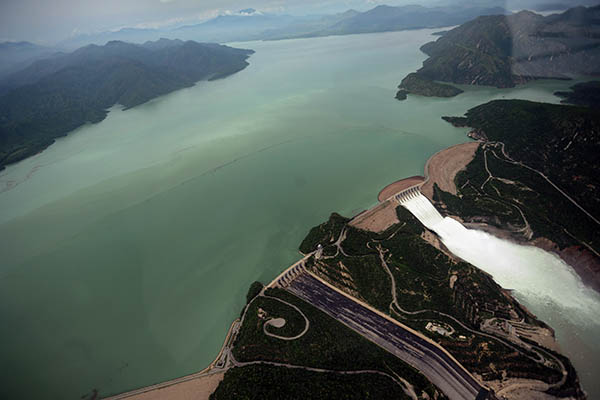 The Khyber-Pakhtunkhwa government threatened on Monday to shut down the Tarbela Dam if the federal government attempted to halt electricity supply to the province in response to the Pakistan Tehreek-e-Insaf’s civil disobedience movement.

“Don’t threaten us with stopping electricity,” said Mushtaq Ghani, the provincial information minister. “This electricity is generated through Tarbela Dam using the resources of the people of Khyber-Pakhtunkhwa,” he told Newsweek via phone. Shutting down the Tarbela Dam, which has a total generation capacity of 3,478MW, could severely increase loadshedding in Pakistan. The country currently has an electricity shortfall of approximately 4,500MW.

The minister was responding to a report that Abid Sher Ali, the minister of state for water and power, had announced that the government would cut electricity supply to anyone who did not pay their utility bills, as envisaged by the PTI’s movement.

PTI chief Imran Khan announced on Sunday night that his party was launching a civil disobedience movement to force the Pakistan Muslim League (Nawaz) government, led by Prime Minister Nawaz Sharif, to resign and call fresh elections. He urged the people of Pakistan to stop paying all taxes, including general sales tax, and utility bills, until the government resigns.

However, according to Ghani, this would not apply to the Khyber-Pakhtunkhwa province. “Our chief, Imran Khan, announced a civil disobedience movement against the federal government only,” he said, referring to federal taxes and utility bills. “We will continue to collect taxes from Khyber-Pakhtunkhwa,” he added.

One stupid thing after another!

If KPK does cut off electricity, Punjab should charging tarrif on all the goods and services provided to KPK, withhold Fed funding for KPK, close down all the international flights to Peshawar and most of all deport all frigging Naswar Khors back to their shit holes.. Will that be acceptable to Pagal Khan? He is breaking up this country.