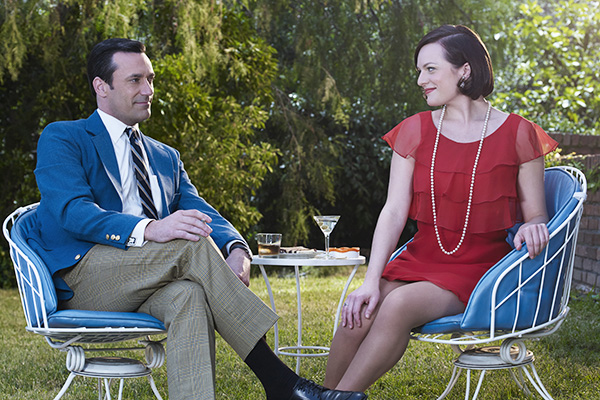 The show that launched a 1960s fashion revival comes to an end this week.

On Sunday, many an Old Fashioned will be raised to Don Draper—or raised in his memory.

After seven seasons, eight years and nearly 100 episodes, Mad Men fans will finally discover the fate of the show’s dashing but conflicted anti-hero as the curtain comes down on the award-winning retro-cool series.

Viewing parties are expected to take place across the United States for the finale of the influential series, which has since 2007 followed the bed-hopping lives of a group of 1960s advertising men in New York. Mad Men—which was a breath of fresh air when it debuted in a television landscape of crime procedurals—launched a 1960s fashion revival and made international stars of its lead actors, especially Jon Hamm as Draper.

Last weekend’s penultimate episode ended with Draper sitting on a bench in the middle of nowhere in Oklahoma, having given away his car while driving west in apparent flight from his flashy Madison Avenue life. U.S. mainstream and social media have been awash with speculation about the denouement of the stylish series, which has won 15 Emmy awards and four Golden Globes over the years.

Cable channel AMC, which made its name with the series and has since been the home of other beloved shows such as Breaking Bad and The Walking Dead, is screening a marathon of all 92 episodes ahead of Sunday’s finale.

Is Draper going to throw himself or be pushed from a skyscraper, echoing the title credit sequence featuring a cut out version of a man falling between huge adverts featuring beautiful women? Could he die in a plane crash?

The show’s creator Matthew Weiner gave little away in an interview with the New York Times, but warned against any disappointment for the show’s millions of fans around the world. “I don’t really feel like I owe anybody anything,” he told the newspaper Thursday. Of the fans, he said: “I’ve been lucky to have them invite us into their home. But we have held up our end of the bargain so far… We really have, and we’ve made such a painstaking effort to surprise and delight and move machinery that tells the story.”

Many of those fans feared an ending along the lines of HBO’s The Sopranos, which frustrated many by closing on an image of Tony Soprano looking up… before fading to black.

Without giving away any key plot points, Hamm has said he hopes the alpha male whose life is built on a stolen identity will finally find peace. Draper—or Dick Whitman, his real name—“has attempted to build several houses on very broken foundations, and needs to address those foundations before he starts building a new house,” he said. “Maybe he finds out… his commitment to fixing what can be fixed,” Hamm told a press conference in Los Angeles ahead of the April premiere of the final half seven episodes.

Viewers now know that Draper’s ex-wife Betty (January Jones) has terminal cancer, with less than a year to live.

The pilot episode written by Weiner was actually rejected by pay-TV channels HBO and Showtime before being taken up by AMC, which at the time was known more for re-running classic films.

“Mad Men will most certainly rank among the top shows in television history and with good reason. Rarely has there been such a perfect melding of character, time period and subject matter in a one-hour TV drama,” said Paul Dergarabedian, media analyst with tracking company Rentrak. “The indelible and unforgettable portrayal by Jon Hamm as Don Draper at the center of Mad Men is just one among many others in the series that will forever be talked about and revered as some of the best developed and most studied characters to grace the small screen.”