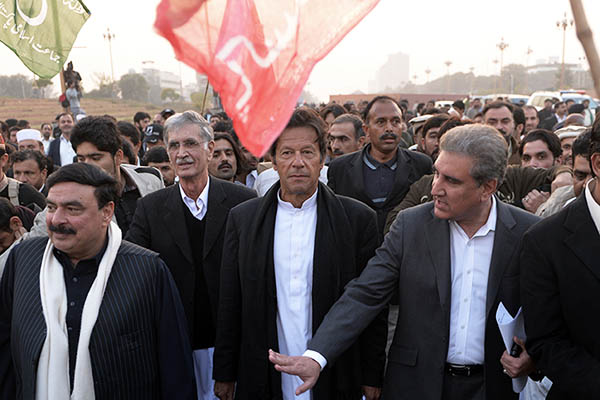 Over 100 national and provincial legislators staged a protest in Islamabad on Thursday against U.S. drone strikes on suspected militants in the tribal areas.

“We will continue our protest against drone strikes and … we will not allow NATO supplies to pass through [Khyber-Pakhtunkhwa] province,” said Imran Khan, whose Pakistan Tehreek-e-Insaf leads the ruling coalition in the province, at the protest outside Parliament.

Apart from PTI legislators, members of Parliament from coalition partner Jamaat-e-Islami also participated in the rally, shouting slogans against the United States and the federal government led by Prime Minister Nawaz Sharif.

Khan accused Sharif’s government of double standards on the issue of drone strikes, and called for the blocking of supply routes through Pakistan for NATO troops in Afghanistan. “Our rulers have double standards, they say one thing to the Americans and the complete opposite to the nation,” said Khan. “These missile strikes violate international laws. We do not want a war with America, but we are protesting against the cruel policies of America.”