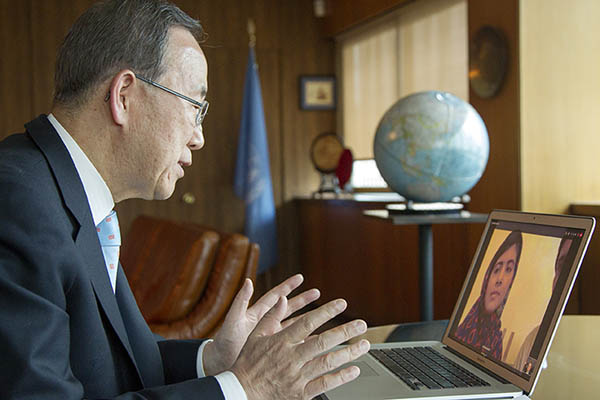 Teen activist’s first public speech since attempt on her life is expected to urge U.N. to ensure universal primary education by end of 2015.

Malala Yousafzai is set to mark her 16th birthday with her first public speech since a Taliban gunman put a bullet in her head after stopping her school bus near her home in Swat.

In the nine months since the attack, doctors have placed a titanium plate over the hole in her skull and her hearing has been badly affected. But Malala has become a global superstar and a favorite to become the youngest ever Nobel Peace Prize winner.

She has been on the cover of Newsweek, been named one of Time magazine’s most influential people in 2013, and has reportedly secured a $3 million contract for a book on her life story.

“This frail young girl who was seriously injured has become such a powerful symbol not just for the girls’ right to education, but for the demand that we do something about it immediately,” said former British prime minister Gordon Brown, now the U.N. envoy on education who organized the World Malala Day. “There will be no compromise with any religious extremist who says girls should not go to school or stop going to school at [age] 10,” Brown told CBS News.

Malala, who will be addressing the U.N. Youth Assembly today, is expected to use her speech to lecture U.N. Secretary-General Ban Ki-moon and any listening world leaders on the need to keep a promise to provide universal primary education by the end of 2015. She will also hand over a petition to Ban signed by more than 330,000 people calling on the 193 U.N. member states to finance teachers, schools, and books to meet the education goal.

“From the day that terrible shooting took place, Malala Yousafzai is a symbol for the rights of girls, and indeed the rights of all young people, to an education,” said U.N. spokesman Martin Nesirky. “And she has further underscored that symbolism through her remarkable recovery and her eloquence in explaining her case and her position.”

The Taliban made it clear that the aim of the shooting was to let the world know that girls have no right to equality at school. Now, more girls than ever before are attending schools in the Swat valley. But the United Nations estimates that 57 million children of primary school age do not get an education—half of them in countries at conflict like Syria.

“Students and teachers across our globe are intimidated and harassed, injured, raped, and even killed. Schools are burned, bombed, and destroyed,” said Diya Nijhowne, director of the Global Coalition to Protect Education from Attack. Nijhowne highlighted a horrific attack in northern Nigeria last week. Gunmen from the Boko Haram Islamist group—whose name literally means “Western education is a sin”—broke into a secondary boarding school and killed 41 students and one teacher before setting fire to the building.

According to the U.N.’s annual report on children and conflict, 115 schools were attacked last year in Mali, 321 in the occupied Palestinian territories, 167 in Afghanistan, and 165 in Yemen.

Schools were also a regular target in Pakistan when Malala started a diary at the age of 11, written under the pseudonym of Gul Makai, the name of a Pakhtun heroine, which was published on the BBC Urdu website. The young girl built up a worldwide following as she told of the anxiety she and friends felt as they saw students dropping out for fear of being targeted by militants. Girls also refused to wear uniforms to school in case militants saw them.

Malala and her family briefly left Swat during a government offensive on Taliban-controlled territory. On their return, they were the subject of threats by militants before the attack last October. The family now lives in Birmingham, England, where the girl has undergone surgery and rehabilitation. The Taliban said it shot Malala because of her efforts to promote “secular education” and have made it clear she remains a target.