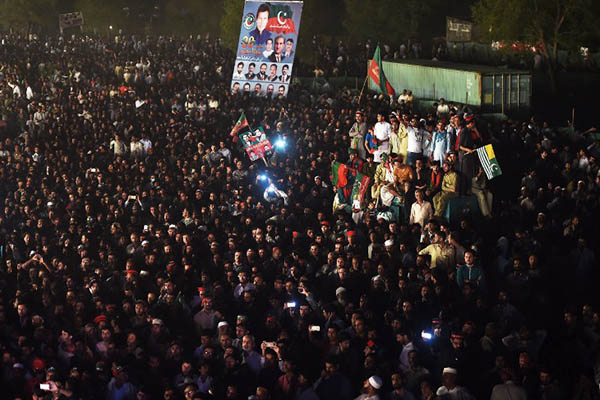 The season of political rallies is upon us.

Pakistan has tilted into another bout of madness. On the same day, on April 24, there were four “mammoth” rallies in Lahore, Islamabad and Karachi pledging dethronement from power of Prime Minister Nawaz Sharif.

The charge was stuffing the wrong terms of reference in the letter written to the Supreme Court for the setting up of a commission of inquiry into the Panama Papers revelations relating to the prime minister and his family. It was expressed in different ways by Imran Khan of the Pakistan Tehreek-e-Insaf and Sirajul Haq of Jamaat-e-Islami, with different “mammoth” gatherings organized in Islamabad and Lahore.

The third rally, addressed by Mustafa Kamal, the MQM rebel, pledged gloomy days ahead for the rump MQM on charges of “working for RAW.” The main MQM also staged a protest at the Karachi Press Club, calling for the release of scores of their “workers” held without charges by the powers that be in the province of Sindh. The rally moved to the residence of Chief Minister Qaim Ali Shah and broke up after promised relief by him.

PTI claimed that their rally at F-9 Park was 300,000-strong while the official figure was set ridiculously low at 25,000. The more realistic figure as accepted by neutral observers was 150,000, which was sufficiently threatening. Imran Khan said the next rally would take place in Lahore but not yet at the Sharif residence. Lahoris, already harassed by Young Doctors and Voluntary Medical Workers’ road aggression must brace for trying days ahead.

The Jamaat-e-Islami rally at Faisal Chowk, Lahore, was modest but its rhetoric was more incendiary, pledging a doomsday endgame, which will shake Pakistan to its foundations to set everything right. Curiously, Kamal’s party claimed its rally at Jinnah Bagh in Karachi was also 300,000-strong. Yet, more curiously, the police thought it was only 25,000. Looking at the TV coverage, it may not have been even 100,000-strong.

There were sidelights that foreshadow more chaos than cure for the ills that besiege Pakistan. Khan announced a march through interior Sindh after losing his lone representative in the Sindh Assembly to Kamal’s new party. He thus ignored the internally bleeding MQM to challenge the PPP, which rules on the basis of a majority rural vote. This may be the beginning of the end of an opposition coalition against Prime Minister Sharif. The Punjab PPP may be silently shifting the party leadership from Sindh to Punjab by joining Khan’s aggressive campaign: are the PPP and MQM actually facing the same kind of fissures? The current mammoth rallies and the coming mammoth ones don’t augur well for the normal functioning of the national economy.