Home Lightbox Mayweather Beats Pacquiao in ‘Fight of the Century’

Mayweather Beats Pacquiao in ‘Fight of the Century’ 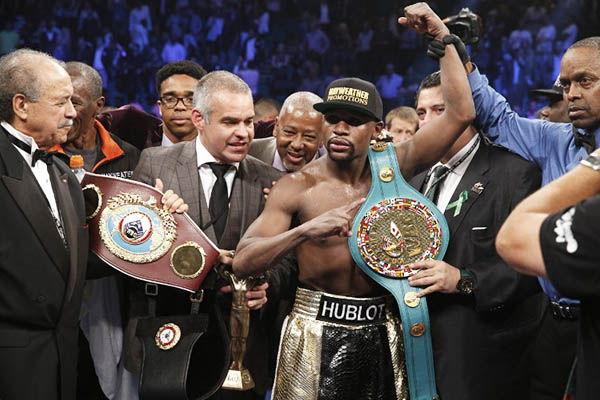 The fight may be one of the most lucrative in boxing history with estimated revenues of $400 million.

Floyd Mayweather cemented his status as the best pound-for-pound boxer in the world with a unanimous decision over Manny Pacquiao as the “Fight of the Century” failed to live up to the hype on Saturday.

Scattered boos rang out around the crowd of 17,000 in the MGM Grand after Mayweather comfortably outboxed his Filipino rival to frustrate hopes of a full-blooded slugfest. The 38-year-old Mayweather (48-0, 26 KOs) retained his WBC and WBA welterweight titles and seized Pacquiao’s WBO belt by winning the fight on all three of the judges’ scorecards.

Mayweather received scores of 116-112 from two judges. The third judge scored it 118-110. But when the results were announced the pro-Pacquiao crowd booed lustily and tried to drown out Mayweather’s post-fight comments over the public address system.

Filipino star Pacquiao suffered the sixth loss of his career to go with 57 victories and two draws. The fight is widely believed to be the most lucrative in boxing history with revenues of $400 million.

Pacquiao was the aggressor, pressing action from the first round and was able to land some big lefts on Mayweather’s chin, especially in the final seconds of the early rounds. But ultimately Pacquiao wasn’t able to keep up his frenzied early pace for all 12 rounds and Mayweather, who was the bigger of the two fighters, managed to slip in counterpunches and hard right hands that stopped the Filipino in his tracks.

Mayweather reiterated after Saturday’s super fight that he would retire after his next fight in September, which will fulfill his six-fight contract to Showtime Sports. “My last fight is in September. I’ll do that and I will hang it up,” said Mayweather, estimated to have earned $200 million.

Pacquiao meanwhile insisted he thought he had won. “I thought I won the fight. He didn’t do nothing,” he said.

The entrance of the fighters to the ring was delayed about 45 minutes because of problems with the heavy demand for pay-per-view telecast and the providers ability to distribute it.

Only a lucky few had tickets to the super fight but thousands more milled around the outside of the Grand Garden arena and in the hotel’s casino.

Before the fight started, the downstairs lobby of the Grand Garden was crowded with people standing about, taking pictures and hoping to catch a glimpse of a celebrity coming in or out of one of the VIP rooms.

Mayweather made a grand entrance befitting of his superstar status. He was accompanied by his “The Money Team”, which includes his father/trainer Floyd Mayweather Sr.

But Pacquiao arrived first to the ring, smiling relentlessly and even taking a selfie with long-time trainer Freddie Roach during his entrance.