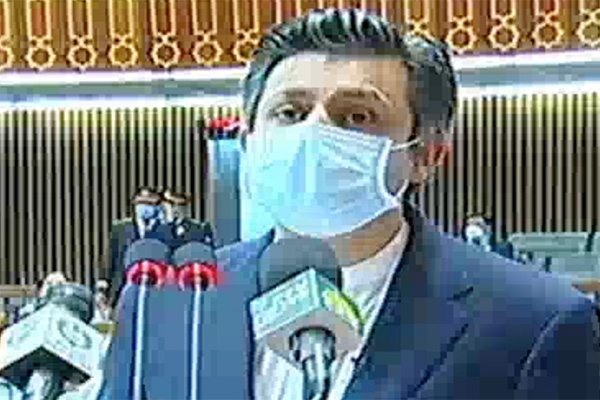 The incumbent Pakistan Tehreek-e-Insaf government on Friday presented its second annual budget, fiscal year 2020-21, with Industries Minister Hammad Azhar announcing it would have no new taxes to provide relief to the public amidst the coronavirus pandemic.

The “corona budget,” as described by Special Assistant to the P.M. on Finance Abdul Hafeez Shaikh, has a total outlay of Rs. 7,294.9 billion, which is 11 percent lower than the revised estimates for 2019-20. It envisages a tax collection target of Rs. 4.96 trillion and non-tax revenue target of Rs. 1.11 trillion. Of the tax collection target, Rs. 2.04 trillion have been estimated for direct taxes, while Rs. 2.92 trillion have been proposed for indirect taxes—customs duties, sales tax and federal excise.

The budget envisages total revenue at Rs. 6,573 billion, of which Rs. 3,700 billion has been set aside for net federal revenue.

Announcing the budget, Azhar said that the government’s top priorities remained battling corruption and ensuring accountability. “The reserves of the State Bank of Pakistan declined from $18 billion to $10 billion due to the failed policies of the past,” he said, as opposition lawmakers waved protest banners and shouted slogans against the government while he was speaking.

“The PTI government is dedicated to protecting the livelihoods of the impoverished,” said Azhar, ignoring the jibes from the opposition. He claimed the country’s economy had been on the path to recovery when it was hit by the coronavirus pandemic, which has raised fears of a global recession. “The coronavirus pandemic caused our GDP to shrink by Rs. 3,300 billion,” he said, adding non-tax revenue declined by Rs. 102 billion.

The minister said the budget deficit would be 7 percent of the Gross Domestic Product (GDP), adding the government planned to improve the economy from a 0.4 percent contraction in last fiscal to 2.1 percent growth in the upcoming year.

For the first time, the government has not raised the salaries of public sector employees, with officials saying the decision had been taken in light of the extraordinary circumstances arising from the COVID-19 pandemic.

The Defense Affairs and Services expenses have increased from Rs. 1,227,388 million to Rs. 1,289,134 million, a boost of 4.79 percent over the revised estimate for the outgoing fiscal, and 11.8 percent over the original allocation. The amount earmarked for defense sector thus makes up 17.68 percent of the total expenditure planned for next year.

Similarly, the budget for Public Order and Safety Affairs, majority dedicated for police, has climbed to Rs. 169,927 million from the outgoing year’s Rs. 153,269 million.

For economic affairs, which includes agriculture, fuel and energy, mining and manufacturing, construction, communications and other industries, the government has allocated Rs. 71,751 million, down from the revised 2019-20 expenditure of 106,411. The bulk of this, 21.79 percent, has been allocated to construction activities.

Despite claims of focusing on climate change, the allocation for environment protection has actually dropped by 8.3 percent from Rs. 470 million to Rs. 431 million.

Housing schemes have witnessed a massive surge, going from Rs. 2,545 million in the outgoing fiscal to Rs. 35,680 million, an increase of 1,301 percent.

Health affairs, a key sector especially in light of the coronavirus pandemic, has by comparison only seen an increase of 112 percent, going from Rs. 12,023 million in the revised outgoing fiscal to Rs. 25,494 million in fiscal year 2020-21.

In the budget estimates 2019-20 subsidies were Rs. 271,500 million, which increased to Rs. 349,500 million in revised estimates. Total subsidies for fiscal year 2020-21 have been estimated at Rs. 209,000 million, which is 23.02 percent less, and 40 percent over, budget estimates and revised estimates of 2019-20, respectively. The allocation for subsidies to WAPDA/PEPCO forms the major component, 59.33 percent, of the total allocation, while Naya Pakistan Housing Authority claims 14.36 percent of the subsidies, KESC 12.2 percent and, PASSCO claims 3.35 percent.

The government has described the Public Sector Development Program (PSDP) as the “main instrument for improving the socioeconomic conditions in the country and achieving the macroeconomic and development objectives and targets set.” For 2020-21, the National Economic Council has approved an overall PSDP at Rs. 1,324 billion, which is 2.9 percent of the GDP, and a decrease of 17.91 percent over budget estimates of 2019-20.

This year’s budget session is being seen as a formality as both PPP and PML-N, the major opposition parties, have agreed not to press for voting on cut motions and not to point out quorum till the passage of the budget by June 30 due to the ongoing coronavirus pandemic and the social distancing guidelines in place for Parliament sessions.