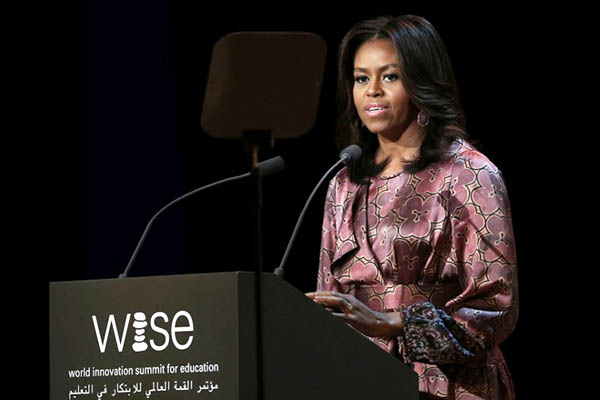 Michelle Obama called for an end to “outdated laws and traditions” preventing millions of girls around the world from completing their education, in an impassioned speech Wednesday in Qatar.

The U.S. first lady, on a seven-day trip to the Middle East, told an education conference in Doha that an “honest conversation” was needed around the globe about how women were treated and how this prevented millions of girls from finishing school.

“If we truly want to get girls into our classrooms then we need to have an honest conversation about how we view and treat women in our societies and this conversation needs to happen in every country on this planet, including my own,” she told delegates at the World Innovation Summit for Education. “When girls are young they are often seen simply as children but when they hit adolescence and start to develop into women they are suddenly subject to all of their society’s bias around gender. That is precisely when they start to fall behind in their education,” she said. “It’s also about attitude and beliefs. It’s about whether parents think their daughters are worthy of an education as their son. It’s about whether our societies cling to outdated laws and traditions that oppress and exclude women.”

Obama spoke for almost 25 minutes at the Qatar National Convention Center to a packed audience, which included political and education leaders from around the world and dignitaries including Sheikha Moza bint Nasser, mother of Qatar’s emir.

The U.S. first lady’s speech was also highly personal, claiming that her education opened up opportunities she “never could have dreamed of as a young black girl from a working class family.”

“My university degrees transported me to places I never could have imagined—to boardrooms and courtrooms, to the White House—where my mother now lives with my family, and we’re raising our daughters just steps from the Oval Office,” she said.

Obama also said the constraints put on women “limit men too.” To loud applause she told the audience: “Today, to all of the men here, I want to be very clear—we need you. We need you as fathers, as husbands and simply as human beings. This is your struggle too. We need you to speak out against laws and beliefs that harm women.”

Obama’s speech was part of the “Let Girls Learn” initiative, a program to find ways to provide education for the 62 million girls worldwide, according to the first lady, who do not go to school every day. Opening the conference, Sheikha Moza warned that the challenges faced by girls in the Middle East were worsening.

“In this region we are not only paralyzed, but going backwards at the speed of light,” she said, adding that “education was under attack.”

Obama is also visiting Jordan during her trip but bad weather forced the postponement of her flight to Amman, scheduled for Wednesday afternoon. An official traveling with the first lady told AFP that Obama was still in Qatar on Wednesday night because of a “weather call.”

“Unfortunately due to a weather call in Amman, the departure of the first lady from Doha has been postponed,” said the official. She is now expected to fly to Jordan on Thursday.