Alleged Taliban in the Hangu district of Khyber-Pakhtunkhwa province have threatened voters with bodily harm if they vote in the by-elections today, according to a pamphlet available with Newsweek.

Earlier this week, militants in Hangu circulated a one-page leaflet (picture below) warning residents of the constituency against voting in the by-elections, and terming democracy “against the true spirit of Islam.”

“We want all the people of Hangu tehsil to know that if they enter a polling station during these elections, they will be murdered. If any woman comes out of her home she will be slaughtered,” states the leaflet under the headline “Beware: Democracy is Kufr (in violation of Islam).”

Written in Urdu, and littered with grammatical errors, the leaflet goes on to warn: “Any village whose residents participate in the polls will be destroyed. Our men will be present inside the polling stations and will note the names and identities of the people who choose to participate in this process.”

The letter concludes with the author claiming to have performed his duty by informing the locals of the threat, adding that it is now in their power to “save their lives.”

While the Hangu division of local militant group Tehreek-e-Taliban Pakistan has allegedly issued the leaflet, it lacks the official masthead of the militant organization. The TTP has not issued any statement regarding the authenticity of this document.

During general elections in May, women were barred from polling in various parts of Khyber-Pakhtunkhwa province and its neighboring tribal areas. However, this letter is the first time both men and women have been specifically cautioned against participating in the polls.

The Election Commission of Pakistan has scheduled by-elections in 41 national and provincial constituencies with Army personnel deployed at 89 sensitive polling stations in Hangu district alone to ensure safety of voters and prevent rigging. PK-42, the Hangu constituency threatened by the Taliban, was won by Farid Khan in May. Local militants gunned down Khan, an independent candidate who joined the Pakistan Tehreek-e-Insaf provincial government after the elections, in June. 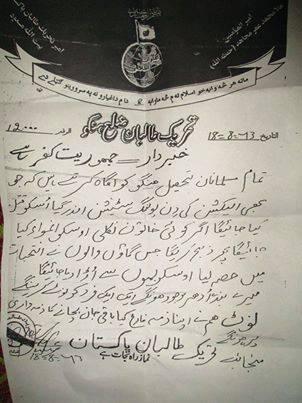