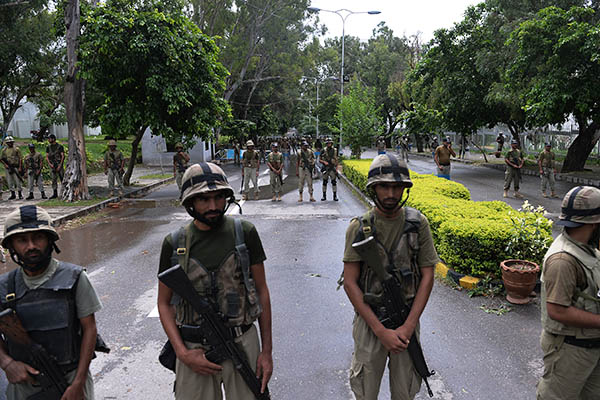 Supreme Court cancels leaves of all judges and orders them to return to Islamabad.

The Pakistan Army on Monday denied local media reports that the chief of staff had asked the prime minister to resign in order to resolve the ongoing unrest caused by anti-government protesters in Islamabad.

“News being run on private channels after chief of Army staff and prime minister meeting regarding prime minister resignation or his going on leave is totally baseless,” said the Inter-Services Public Relations Directorate in a short statement issued on its website. Maj. Gen. Asim Bajwa, the director general of the ISPR, also rubbished the rumors in a post on Twitter. “PM-COAS meeting: News of #Army #Chief asking #PM to resign or going on leave is baseless,” he tweeted.

Anti-government protesters, led by cricketer-turned-politician Imran Khan and populist cleric Tahir-ul-Qadri, have been camped out in Islamabad since Aug. 15, and have demanded the resignation of P.M. Sharif as a prerequisite for an end to their protest. Following a meeting between the Army chief and the prime minister, multiple private TV channels had reported that Gen. Sharif had asked P.M. Sharif to announce his resignation to resolve the crisis.

A spokesman for the Prime Minister’s House also denied the rumors, saying: “No issue related to the prime minister’s resignation came under discussion during the meeting between prime minister and military chief today.” According to the spokesman, both leaders discussed the ongoing political turmoil and Army chief Gen. Raheel Sharif conveyed his belief in the democratic process to Prime Minister Nawaz Sharif.

Meanwhile, possibly reflecting the Supreme Court’s concerns with the ongoing unrest, Chief Justice of Pakistan Nasir-ul-Mulk has directed all judges of the court to reach Islamabad with immediate effect. Several judges had been on official leave and the chief justice has directed them to cancel plans and return to the federal capital, according to an official of the Supreme Court. “The nature of cases and applications pending before the Supreme Court right now requires a larger bench for additional hearings,” he added.