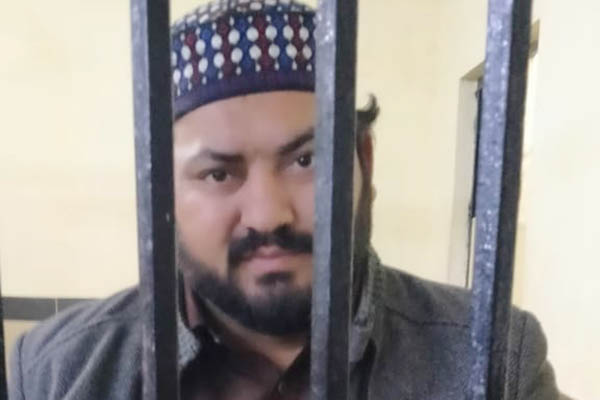 Imran Chishti, the man accused of organizing a protest outside the Gurdwara Janam Asthan in Nankana Sahib and seen in video footage threatening to tear down the holy site, was on Sunday arrested by police in Punjab.

In a posting on Twitter, Punjab Chief Minister’s focal person (digital media) Azhar Mashwani said that Chishti had been detained under the Anti-Terrorism Act, which bars him from securing bail. “The main culprit in #NankanaSahib incident Imran has been arrested. FIR # 6/2020 u/s 295A/290/291/341/506/148/ 149, 6 sound system /7ATA has been registered at Nanakana Police Station,” said the Twitter posting.

There had been growing calls for Chishti’s arrest after his demonstration dispersed, with people in Pakistan and abroad taking to social media to criticize Prime Minister Imran Khan’s inaction and calling out his claims of ensuring the rights and safety of all minorities in the country. Chishti had even posted a video message, circulated on social media, apologizing for the incident in a bid to defuse the ire directed at him.

Prior to Chishti’s arrest on Sunday, the prime minister had personally condemned the incident, taking pains to prove it was dissimilar to the ongoing oppression of minorities in neighboring India. In a series of tweets, he said the mob that gathered outside Nankana Sahib was against his vision. “The major difference between the condemnable Nankana incident and the ongoing attacks across India on Muslims and other minorities is this: the former is against my vision and will find zero tolerance and protection from the government, including police and judiciary,” he said. “In contrast, Modi’s RSS vision supports minorities oppression and the targeted attacks against Muslims are part of this agenda. RSS goons conducting public lynchings, Muslims being violated by mobs are all not only supported by Modi Govt but Indian police leads anti-Muslim attacks,” he added.

Last week, a group of around 150 angry protesters gathered outside Nankana Sahib, with accused Chishti claiming his family was being targeted for police because his brother had eloped with a Sikh girl who had converted to Islam. He had demanded justice for his family, and threatened to raze the Gurdwara to the ground and evict all Sikh families from the area. The protests quickly went viral on Twitter, forcing police to take action and ramp up security in the area. The protesters eventually dispersed after negotiations with the government, who assured them of justice.

Earlier on Sunday, Interior Minister Ijaz Shah visited Nankana Sahib on the prime minister’s instructions and reviewed the current situation. He told a press conference that all the religious groups in the region were united in brotherhood and peace. He accused “anti-state elements” of being responsible for the protest and vowed to punish all those found responsible.

Pakistan believes in inter faith harmony. All the minorities are safe in Pakistan. Any person taking law in his hand is punishable according to law.