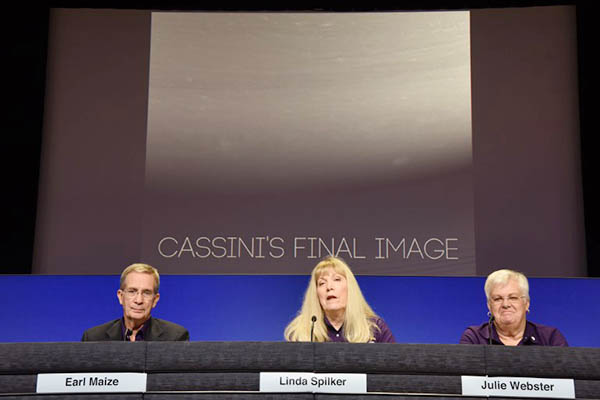 After 20 years in space, NASA’s famed Cassini spacecraft made an intentional death plunge into Saturn on Friday, ending a storied mission that scientists say taught us nearly everything we know about Saturn today and transformed the way we think about life elsewhere in the solar system.

“The spacecraft is gone,” said Cassini program manager Earl Maize of NASA’s Jet Propulsion Laboratory. “Thanks, and farewell faithful explorer. But the legacy of Cassini has just begun,” he told a press conference afterward. “The effect Cassini has—and will have—on the future of planetary exploration will go on for decades.”

Cassini’s plunge into the ringed gas giant—the farthest planet visible from Earth with the naked eye—came after the spacecraft ran out of rocket fuel after a journey of some 4.9 billion miles. Its well-planned demise was designed to prevent any damage to Saturn’s ocean-bearing moons Titan and Enceladus, which scientists want to keep pristine for future exploration because they may contain some form of life.

“There are international treaties that require that we can’t just leave a derelict spacecraft in orbit around a planet like Saturn, which has prebiotic moons,” said Maize. “Prebiotic” refers to the conditions or ingredients that can occur before life emerges. Three other spacecraft have flown by Saturn—Pioneer 11 in 1979, followed by Voyager 1 and 2 in the 1980s. But none has studied Saturn in such detail as Cassini, named after the French-Italian astronomer Giovanni Domenico Cassini, who discovered in the 17th century that Saturn had several moons and a gap between its rings.

“This is the final chapter of an amazing mission, but it’s also a new beginning,” said Thomas Zurbuchen, associate administrator for NASA’s Science Mission Directorate. “Cassini’s discovery of ocean worlds at Titan and Enceladus changed everything, shaking our views to the core about surprising places to search for potential life beyond Earth.”

Cassini launched from Cape Canaveral, Florida in 1997, then spent seven years in transit followed by 13 years orbiting Saturn. In that time, it discovered six more moons around Saturn, three-dimensional structures towering above Saturn’s rings, and a giant storm that raged across the planet for nearly a year.

The 22 by 13 foot spacecraft is also credited with discovering icy geysers erupting from Enceladus, and eerie hydrocarbon lakes made of ethane and methane on Saturn’s largest moon, Titan.

In 2005, the Cassini orbiter released a lander called Huygens on Titan, marking the first and only such landing in the outer solar system, on a celestial body beyond the asteroid belt. Huygens was a joint project of the European Space Agency, the Italian Space Agency and NASA.

“For 13 years we have been running a marathon of scientific discovery,” she added. Eight of the spacecraft’s 12 scientific instruments were still capturing data in Cassini’s last moments as it flew more deeply into Saturn than ever, before disintegrating like a meteor.

“Who knows how many Ph.D. theses might be in just those final seconds of data?” Spilker asked.

Already, some 4,000 scientific papers have been based on data from the mission, said Mathew Owens, professor of space physics at the University of Reading, in England. “No doubt scientists will be analyzing the information from its final, one-way trip into Saturn’s atmosphere for years to come,” Owens said.

Michael Watkins, director of NASA’s Jet Propulsion Laboratory, described Cassini’s fate as “not an end but really a beginning.”

“The discoveries that Cassini has made over the past 13 years in orbit have rewritten the textbooks on Saturn, have discovered worlds that could be habitable and have guaranteed that we will return to that ringed world,” he said.

NASA is currently considering proposals for the next mission to Saturn and expects to make an announcement about the finalists later this year, said NASA’s planetary science division director Jim Green.