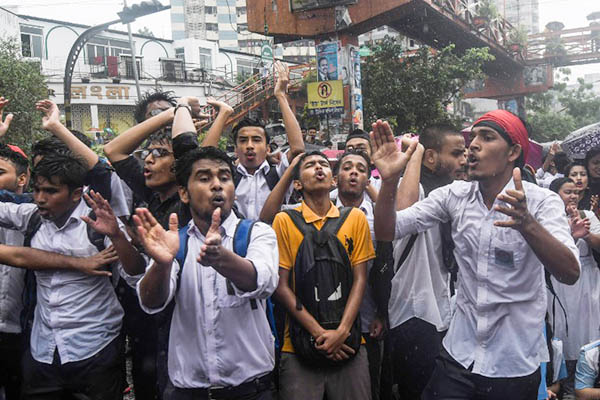 Bangladesh shut down high schools across the country on Thursday as tens of thousands of students protested for a fifth straight day after two teenagers were killed by a speeding bus.

Authorities had pleaded with students to call off the protests that have near-paralyzed Dhaka and beyond and prompted foreign embassies to issue travel alerts. But thousands blocked major intersections in Dhaka as police armed with shields and batons drove back students in parts of the capital, with some reports of vehicles being vandalized.

The demonstrators, mostly students in their mid-teens, brought traffic to a standstill as they marched through the streets chanting “we want justice.”

Anger has not subdued since a bus racing for passengers killed a boy and girl on the roadside on Sunday, igniting the protests.

Bangladesh’s transport sector is widely seen as corrupt, unregulated and dangerous, and as news of the teenagers’ deaths spread rapidly on social media they became a catalyst for an outpouring of anger. An insensitive comment by Shajahan Khan, a government minister with ties to powerful transport unions, also triggered fresh outrage.

Khan questioned why there was such uproar over the two Dhaka children but no reaction when 33 people were killed in an Indian bus crash the day before.

There have been widespread social media demands for his resignation even though the minister later apologized.

The education ministry shut down high schools on Thursday in an effort to quell unrest, promising students their demands for reforms to road safety would be considered. “They should have taken our demands seriously, but they didn’t,” Imran Ahmed, a protesting student, said.

Dhaka suffers from daily gridlock but congestion has been exacerbated by blockades set up across the city since Sunday. In some parts of Dhaka, students occupying major intersections Thursday checked license plates and demanded to see driver identification and registration documents.

“We don’t want any vehicles without licenses on the streets. Those unfit to drive should not get licenses, and we don’t want underage motorists driving public transport,” said one protester, Mohammad Sifat.

The embassies of the U.S. and Australia warned of significant delays and disruptions as a result of the protests across Dhaka and elsewhere. Many residents were forced to walk across the congested capital to offices and workplaces. But some joined the students, frustrated at the government’s inability to tackle Dhaka’s notoriously dangerous roads.

“I support this movement, and sincerely hope it will shake out corruption in the system,” Yunus Ali, a businessman, told AFP at a busy demonstration.

Home Minister Asaduzzaman Khan on Wednesday promised that the government would launch a public transport safety campaign and urged the protesters to go home. “People are suffering and we don’t want this,” he said.

According to the National Committee to Protect Shipping, Roads and Railways, a private research group, more than 4,200 pedestrians were killed in road accidents last year, a 25 percent increase from 2016.