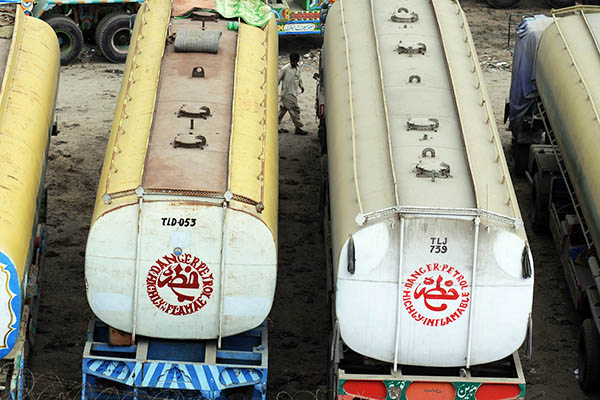 Two men killed in latest strike on supplies for allied forces in Afghanistan.

Gunmen in northwest Pakistan opened fire on tankers carrying fuel for NATO troops in Afghanistan on Monday, killing a driver and wounding two others, officials said.

The incident happened in the Jamrud area of Khyber Agency, one of seven semi-autonomous tribal regions where the military has been battling the homegrown insurgents for years. “A convoy of six oil tankers was heading toward Afghanistan when four attackers riding two motorbikes attacked the first tanker, killing its driver,” said senior local administration official Irshad Khan. He said the tanker overturned as a result of the firing, adding two other persons including a helper and a passerby were injured. The injured helper died shortly after reaching hospital.

Khan said the remaining five tankers returned to Peshawar, the capital of Khyber-Pakhtunkhwa province, after the attack. Another local administration official Mehtab Khan confirmed the incident and casualties.

NATO supply trucks, which carry everything from fuel to munitions and food, often come under attack on their journey between Karachi and border crossing points. The coalition is winding down operations in Afghanistan with its 44,000 combat troops due to pull out by the end of this year.

Over 100 tanker drivers and crewmembers have been killed in attacks on fuel supplies for NATO in Afghanistan since 2009. Terrorists affiliated to the Pakistani Taliban often claim responsibility for the attacks.