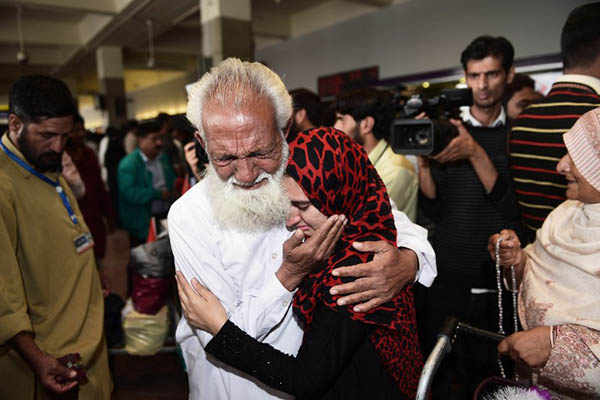 Defense minister says approximately 250 Pakistanis are still stranded in war-torn state and will be evacuated shortly.

Pakistan evacuated nearly 200 of its citizens from war-torn Yemen on Friday as Prime Minister Nawaz Sharif discussed the crisis with his counterpart in Turkey.

There were tears and relieved smiles at Islamabad’s Benazir Bhutto International Airport as the specially chartered Pakistan International Airlines plane arrived with the 176 evacuees. Pakistan has yet to decide whether to accept Riyadh’s request for it to join the Saudi-led coalition fighting back Shia Houthi rebels trying to take over Yemen.

More than 500 Pakistanis were evacuated on Sunday and the latest batch arrived from Djibouti, where they had been taken by sea from Yemen by the Chinese navy. “I live right next to the airport and even I got some bullets through my window about two weeks ago, so since then, I moved out,” said a mother-of-four. “The main thing is I didn’t want my children to suffer from the trauma of what was going on around us.”

Pakistan’s Civil Aviation Authority said 50 of the 176 would travel on to Karachi.

Defense Minster Khawaja Asif told reporters there were between 200 and 250 Pakistanis still stranded in Yemen and the government was trying to get them home within the next two days.

Parliament will meet on Monday to debate whether to join the military coalition led by close ally Saudi Arabia. Islamabad says it is ready to defend Saudi territorial integrity but does not want to inflame sectarian divides.

Speaking in Turkey after talks with his counterpart Ahmet Davutoglu, Sharif urged parties to the conflict to try to find a peaceful resolution.

The countries participating in the Yemen offensive are largely Sunni Muslim, and the intervention has been strongly criticized by Iran, the leading Shia power.