New Government Must Commit to Protecting Freedom of Expression: HRCP

In annual report on the state of human rights in Pakistan, independent body notes that 2021 saw many rights violations from ousted PTI-led government 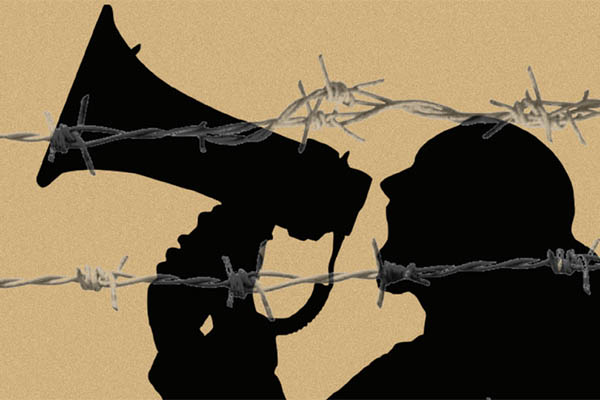 The Human Rights Commission of Pakistan (HRCP) on Friday issued its State of Human Rights in 2021 report, expressing serious reservations about the persistent decline in various rights across the country, especially freedom of expression.

According to HRCP Chairperson Hina Jilani, there were at least nine cases reported of journalists being intimidated or silenced altogether, “whether in the form of assault, enforced disappearance, murder or over censorship.” She also regretted that the ousted Pakistan Tehreek-e-Insaf (PTI)-led government would be “remembered” for trying to impose the “draconian” Pakistan Media Development Authority Ordinance in a bid to exert pressure on the press.

“The state’s attempts to expand the scope of restrictions on freedom of expression under Article 19 of the Constitution have emboldened non-state actors to impose their whims—often violently—on those who do not agree with them,” she said, noting that the lynching of a Sri Lankan national in Sialkot on blasphemy allegations and the murder of activist Nazim Jokhio allegedly by PPP lawmakers were both examples of this.

On violence against women, the report said that 5,279 rape cases and 478 honor killings were reported nationwide in 2021. Referring to the brutal murder of Noor Mukadam in Islamabad, it said women’s rights activists had “rightly” referred to a “femicide emergency” in Pakistan in the past year.

On lawmaking—the primary function of Parliament—the report said 172 laws were enacted nationwide; 58 at the center and 114 by the provincial assemblies. “The Punjab Assembly’s performance was the worst, with only 15 laws passed,” it said, adding that the federal government had continued its practice of circumventing correct constitutional and parliamentary procedures by legislating through presidential ordinances—“a record 32 issued in 2021.” The report regretted that most parts of the country had lacked a functional local government through much of 2021.

Referring to the administration of justice, the HRCP stressed that by the end of 2021, over 2.14 million cases were pending in the judiciary compared to 2.15 million in 2020, a minor reduction in backlog of cases. “According to data collected from press reports, the death penalty was awarded to at least 125 persons in 2021 (including three women)—a fall from at least 177 persons in 2020,” it said, adding that no executions had been reported to have been carried out.

“There were 1,143 prisoners on death row, according to the provincial prisons departments. Sindh accounted for the highest number of condemned prisoners at 490, including two women,” it said, adding that prisons in the country remained “sorely overcrowded” with 87,668 inmates in 119 jails against a sanctioned capacity of 65,334.

Addressing Pakistan’s involvement with international human rights mechanisms, the HRCP said that the European Union had initiated a review of the country’s eligibility for GSP+ status in April in light of recent human rights abuses. However, it said, no grounds had been found to revoke the status, and it was extended till 2024. Meanwhile, it noted, U.N. human rights experts had called on Pakistan to halt evictions of residents from Gujjar Nullah and Orangi Nullah in Karachi, and also appealed for the release of Stephen Masih, a Pakistani Christian from Sialkot detained for two years on blasphemy charges.

On the state of law and order in Pakistan, the report noted that over 100 persons had been reported to have died in target killings, military operations and various other incidents of high-degree violence in Khyber-Pakhtunkhwa, including four women aid workers who were gunned down in North Waziristan. “In January, Islamic State militants kidnapped and killed 11 coalminers from the Shia Hazara community,” it said, noting this had provoked a protest against the incident in Quetta that had called for then-prime minister Imran Khan visit their camp. “However, the prime minister termed their demand ‘blackmailing’ and refused to visit the protesters,” it recalled.

The report also noted the extrajudicial killing of a student, Faizan Jattak, by the Eagle Squad of the Quetta Police, adding that despite the perpetrators being arrested, no headway had been made on the case by the end of 2021. “In January, 21-year-old Usama Satti was shot dead when police personnel opened fire on him for not stopping his car,” it said. “In February, Irfan Jatoi, a student at Sindh University in Jamshoro, was abducted by the police who claimed he was a ‘dangerous dacoit.’ Jatoi was later killed in an encounter in Sukkur,” it added.

“The transgender community continued to be marginalized both socially and economically,” it said, noting that in Karachi alone, more than 200 threatening video and audio messages were sent to transgender persons, creating a sense of fear and insecurity among the community. The report also noted that at least 1,896 cases of child abuse were documented across the country between January and June, “according to one estimate although the number is likely higher.” Of these, it said, 1,084 cases involved sexual abuse, 523 were cases of abduction, 238 were cases of missing children, and 51 were cases of child marriage. Children between the ages of six and 15 years, both boys and girls, remained the most vulnerable to abuse and violence, it added.

Referring to the formal launch of the controversial Single National Curriculum in August, the HRCP noted that it was accused of a lack of inclusivity, overemphasis on Islamic religious content at the expense of religious minorities, and poor pedagogy. The Annual Status of Education Report 2021 found that nearly 19 percent of all school-age children in Pakistan remained out of school, it added.

In her statement, Jilani urged the incumbent coalition government to not make the mistake of taking human rights issues “lightly” during its tenure. “It must commit to protecting freedom of expression and the rights of all vulnerable and excluded groups,” she said, adding that it should also not repeat mistakes of the past by acquiescing to far-right groups such as the Tehreek-e-Labaik Pakistan. Nor should it, she stressed, ignore citizens’ voices—whether in Balochistan or Khyber-Pakhtunkhwa.

“For over 30 years, the HRCP has been the only organization to have consistently documented the country’s human rights situation, providing a unique barometer of human rights and democracy,” she said. “We earnestly hope that, this time, the state will pay heed,” she added.