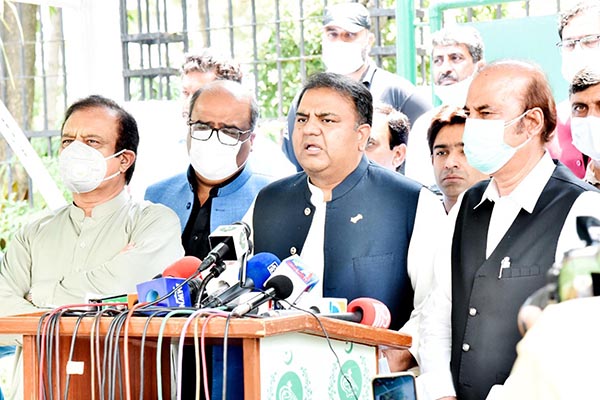 Information Minister Fawad Chaudhry on Monday claimed the 2023 general elections will be held under a “new mechanism,” adding that consultations were underway with the Election Commission of Pakistan (ECP) to achieve this goal.

Addressing a press conference after a meeting at the ECP to discuss the use of electronic voting machines and internet voting for overseas Pakistanis, he said that the government team—comprising himself, Science and Technology Minister Shibli Faraz, Adviser to the P.M. on Parliamentary Affairs Babar Awan, Adviser on Interior and Accountability Shahzad Akbar—had shared details of the proposed 49 amendments to the Elections Act (Amendment) Bill, which was tabled in the National Assembly last year.

Chaudhry said the government had decided to have the science and technology minister present a demonstration on electronic voting machines to the ECP. Once the presentation was completed, he said, the ECP could appoint either internal experts or external consultants and the government would provide all possible assistance to the ECP in this regard.

The minister reiterated his claims that rigging allegations in previous elections had been a result of the delay between the closure of polling stations and the announcement of results, and using EVMs would remove this. He also stressed that internet voting for overseas Pakistanis had been a key pre-poll promise of the Pakistan Tehreek-e-Insaf, and the nine million eligible voters living abroad had a right to exercise their right to vote.

Awan, meanwhile, claimed that the ECP had already framed rules for the use of EVMs and internet voting, but had no law to serve as a guide. He said the ordinance authorizing and binding the ECP to procure EVMs and allow overseas Pakistanis to vote without having to return to Pakistan had already been promulgated. “General Elections 2023 will be contested on electronic voting,” he claimed.

Following the government team’s press conference, the Pakistan Muslim League (Nawaz) reiterated its concerns of the 2023 elections being “rigged” using EVMs. Spokesperson Marriyum Aurangzeb told media that the PMLN would not discuss electoral reforms with people who had committed electoral fraud, repeating an allegation of the PTI coming into power through rigging.