Home Latest News ‘No End to Bangladesh Crisis Without Polls’

‘No End to Bangladesh Crisis Without Polls’ 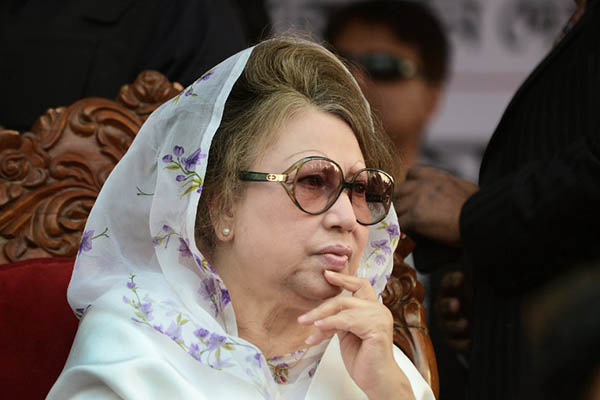 Opposition leader warns situation can worsen if new elections are not held promptly.

Opposition leader Khaleda Zia insisted Wednesday that there could be no resolution of Bangladesh’s growing political crisis unless Prime Minister Sheikh Hasina agreed to stand down and allow new elections.

“Every conscious and conscientious person in Bangladesh knows that the only way to resolve the current political crisis is to hold an inclusive, competitive and meaningful election,” Zia told AFP by phone. “The more quickly it can be arranged, the better it is for everyone. If it is delayed, the crisis could become even more complex,” she said in her first interview with Western media since she was confined to her office more than a month ago.

Zia, leader of the main opposition Bangladesh Nationalist Party (BNP), said that she wanted to reach a consensus on the framework for the elections with her archrival Hasina but there had been no response to proposals that she had previously put forward.

“We said a fair election should be held based on consensus of all parties and through talks. We want that,” she said. “We also have to make some decisions on the election commission, administration and electoral rules so that a level playing field is created for all the parties. We made a seven-point proposal on these matters a few days ago … but we’ve not heard anything from them,” she added.

More than 80 people have been killed in political violence since Zia was confined to her office in central Dhaka on Jan. 3, shortly before the anniversary of last year’s general elections that was boycotted by all opposition parties. Many of the victims have died in firebombings of buses and trucks since Zia ordered her supporters to stage a transport blockade, which is in its sixth week.

Hasina has said she will not deal with “terrorists” or “murderers,” comparing the arson deaths to the recent execution of a Jordanian pilot by the Islamic State organization. But Zia said the arson attacks appeared to be the work of Hasina’s Awami League.

“It’s the Awami League which is behind all this violence and they are putting the blame on us,” said the two-time former prime minister. “We’ve read in the newspapers how petrol bombs were found in the Awami League’s office.”

Zia, who is the leader of a 20-party opposition alliance, said that 18,000 opposition activists had been arrested since the start of the year.

Earlier in the day, British High Commissioner Robert Gibson became the first senior Western diplomat to meet Zia since the start of her confinement. In brief comments after the meeting, Gibson urged “all parties to fully consider the effects of their actions and resist from causing further damage to the country’s national interest.”

Although there were widespread calls for Hasina to stage fresh elections in the aftermath of last year’s effective one-horse race, those calls have been more muted in recent months. Zia, 69, welcomed the prospect of greater international pressure on Hasina. “The world community should put stronger and more effective pressure on the government for compromise and dialogue,” she said.

Zia and Hasina have a notoriously poisonous relationship after ruling Bangladesh for much of last 25 years.