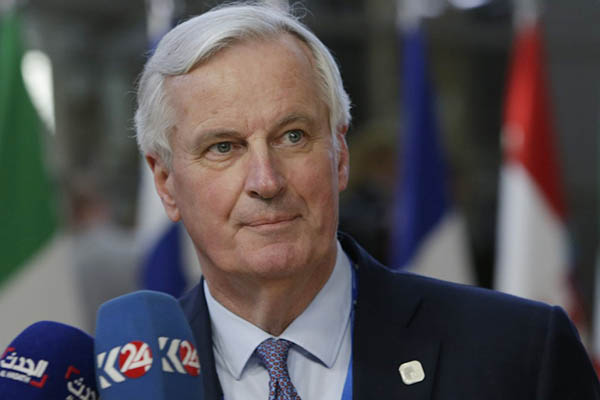 Chief Brexit negotiator Michel Barnier warned E.U. member states that Johnson was trying to divide them by ramping up the threat of a damaging “no-deal” divorce. And the president of the European Commission, Jean-Claude Juncker, told Johnson in a phone call that E.U. leaders have given Brussels no mandate to renegotiate.

Earlier, in a pugnacious parliamentary debut as leader, Johnson had urged the European Union to “rethink” its opposition to re-opening the current deal. “If they do not, we will of course have to leave the E.U. without an agreement,” he declared, vowing to “turbo-charge” preparations ahead of the latest deadline of Oct. 31.

The former London mayor warned that the terms of the agreement struck in November by his predecessor Theresa May were “unacceptable” and would “sign away our economic independence.”

The former foreign secretary also threatened to withhold the £39 billion divorce bill that Britain has previously said it owes the European Union and spend it instead on preparing for a no-deal outcome. Just hours later, Barnier warned that Johnson’s demands were “unacceptable,” in an email to member state ambassadors seen by AFP that described the speech as “rather combative.”

“P.M. Johnson has stated that if an agreement is to be reached it goes by way of eliminating the backstop,” Barnier wrote, referring to a clause of the current deal that would keep the Irish border open under all scenarios. “This is of course unacceptable and not within the mandate of the European Council,” he wrote. The European Council represents the 28 leaders of E.U. member states.

And Barnier advised the leaders “we have to be ready for a situation where he gives priority to the planning for ‘no deal,’ partly to heap pressure on the unity of the EU27.”

Juncker echoed this message in his first phone call with Johnson since the latter took office. “President Juncker listened to what Prime Minister Johnson had to say, reiterating the E.U.’s position that the Withdrawal Agreement is the best and only agreement possible—in line with the European Council guidelines,” Juncker’s spokeswoman Mina Andreeva said.

Johnson addressed a raucous session of parliament, in which he was repeatedly shouted down by opposition lawmakers. In his letter, Barnier noted the domestic British opposition to Johnson’s policy, and appeared to suggest that it might provide an opening for E.U. capitals to exploit. “I note also the many strong reactions to the speech in the House of Commons,” Barnier wrote. “In this context we must follow carefully the further political and economic reactions and developments in the U.K. following this speech.”

The exchanges came a day after Johnson purged more than half the ministers in May’s team and installed what some have described as the most right-wing British government in decades. The 55-year-old has assembled a team of social conservatives and Brexit hardliners who argue that leaving the E.U. after 46 years without an agreement will be less painful than economists warn.

The markets were relieved by the appointment of former Deutsche Bank Sajid Javid as finance chief. The pound held steady against the dollar and euro as traders waited for Johnson’s first policy moves.

Johnson argues that his threat of a chaotic end to Britain’s E.U. involvement will force Brussels to relent and give London better terms that would let it pursue trade deals with powers such as China and the United States.

Brexit backers in parliament had accused May of ignoring voters’ wishes by promising to keep the U.K. tied to the bloc’s economic rules if necessary to preserve a free-flowing border between E.U. member Ireland and Britain’s Northern Ireland.

Johnson’s solution for the frontier revolves around proposals that have been rejected as either unworkable or insufficient by both E.U. and Irish leaders.

Irish Prime Minister Leo Varadkar—his heavily trade-dependent nation standing to lose most from a messy E.U.-U.K. split—reiterated on Thursday his call for compromise. “I hope that the new U.K. prime minister hasn’t chosen no deal,” he said.

Johnson will have the backing of his governing Conservative party but not the nation in his first days in office. He beat the now-former foreign secretary Jeremy Hunt by a two-to-one margin in a vote held by fewer than 160,000 paying members of the Conservatives. But a YouGov survey found his approval rating in Britain as a whole at just 31 percent..