Home Latest News No National Dialogue With Maryam or Maulana 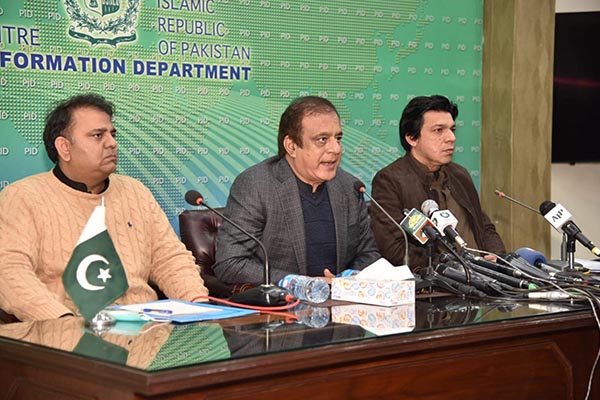 Members of Pakistan’s federal cabinet on Monday claimed the government was ready for dialogue with the opposition—but only with elected leaders who were in Parliament, sidelining Pakistan Democratic Movement President Maulana Fazlur Rehman and Pakistan Muslim League (Nawaz) Vice President Maryam Nawaz.

“National dialogue is a part of politics for which the ideal forum in Parliament,” Information Minister Shibli Faraz, flanked by Science and Technology Minister Fawad Chaudhry and Water Resources Minister Faisal Vawda, told a press conference in Islamabad. “Neither Maryam Nawaz nor Maulana Fazlur Rehman are part of Parliament and would be excluded from the process,” he added.

Slamming the opposition parties for their public gatherings and demands for Prime Minister Imran Khan’s ouster, he reiterated claims that they only considered elections free-and-fair if they won them, while believing all elections where they lost were rigged. He said the government’s proposed electoral reforms would be part of any national dialogue.

Continuing the government’s thus far failed bid to sow dissent within the PDM ranks, Faraz claimed that it was “unfortunate” that the “facilitators in the killing” of Zulfikar Ali Bhutto and those who had “tortured” Benazir Bhutto had shared the stage with the Pakistan Peoples Party leadership at Larkana on Dec. 27, her 13th death anniversary. He did not elaborate on who he was referring to.

To a question on leaders of the Jamiat Ulema-e-Islam breaking from Rehman, he claimed the people who had termed the PDM chief “selected” enjoyed a “good reputation” within the party.

Vawda slammed Maryam Nawaz for belonging to a “family of corrupt people,” alleging that they were only involved in politics out of self-interest. “Maryam should be ashamed of equating herself with Benazir Bhutto. She was an educated person and not a failed student like you, what have you done for democracy and for the masses?” he said, even though the PMLN leader has never personally sought to present herself as an avatar of the PPP leader. He also questioned why the PPP would choose to resign from assemblies ahead of the Senate elections.

Referring to Maryam’s speech at Garhi Khuda Bux on the occasion of Benazir’s 13th death anniversary, the minister questioned what qualifications she had to be a leader and claimed it was “shameful” elders to be standing behind her “like servants.” He also reiterated the government’s demands for the opposition to resign from assemblies now rather than their announced plans to wait until Jan. 31 for Imran Khan to resign.

Vawda also questioned why the PMLN had not approached any legal forum to submit proof of alleged rigging in the 2018 general elections, and slammed leaders of the JUIF for threatening to drag generals of the Pakistan Army into the streets. “This country is not your personal property,” said the minister who had once said PMLN leader Ahsan Iqbal should be “hanged for three days.”

During his turn at the podium, Science and Technology Minister Chaudhry said Maryam had never even “managed her own kitchen” but believed she could run a country. “She lived in her father’s house; she never managed her own household,” he added.

The minister accused the PMLN leadership of changing colors faster than chameleons, claiming they spoke of Punjabi nationalism in Lahore; Benazir Bhutto in Sindh; and anti-Army narratives when confronted with Indian leaders like Narendra Modi. He slammed the PDM for “granting” anti-Punjab political parties a platform, and branded Maryam and Bilawal Bhutto-Zardari “political interns” who were merely “show-pieces” for the real leaders.

Separately, President Arif Alvi came out in support for a “national dialogue” during a meeting with senior journalists at President House, but stressed that a final decision on who would be invited rested with Prime Minister Imran Khan. Noting that any dialogue would be incomplete without discussion on the National Accountability Bureau and its operations, he claimed that the political atmosphere should become calmer in the near future.

Terming the opposition’s demands for Khan’s ouster “unjustified,” he claimed the country’s political system had been destabilized for the past two years. He did not offer any insight on his own party’s similar activities throughout the five years of the PMLN’s rule between 2013 and 2018.