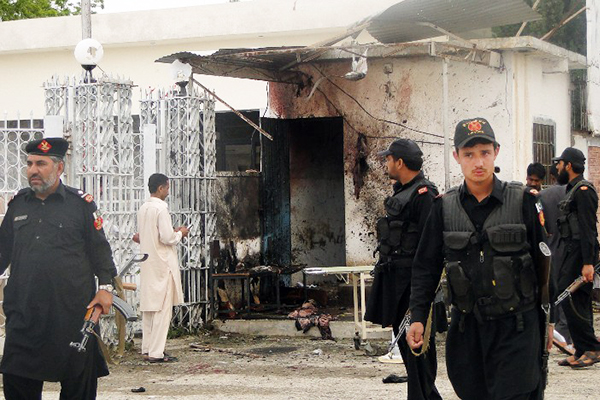 The hospital in Khar, Bajaur, after Saturday’s suicide attack. AFP

Attack follows yesterday’s suicide bombing by a woman in Bajaur.

Between four to five soldiers have been killed and up to four injured from a blast in the federally-administered North Waziristan tribal agency on Sunday morning. The attack follows yesterday’s suicide bombing in Bajaur agency which killed four.

The dead and wounded from Sunday’s attack were part of a military convoy en route from Mirali to Bannu. “The military convoy hit an improvised-explosive device in Mirali,” a security official told Newsweek wishing not to be named. “At least five security personnel have been killed and two are wounded. The IED damaged only one vehicle.”

Other security officials said the death toll was four with an equal number injured. “The roadside bomb was planted near Khawaja Khar checkpost,” said one. An Army official in Peshawar confirmed the attack on the convoy of more than a dozen vehicles. “The bomb was planted under a culvert near the checkpost, it destroyed one military vehicle, and killed four soldiers,” he said.

No one immediately claimed responsibility for the blast.

Yesterday in the Bajaur tribal agency, a female suicide bomber went off outside a hospital in Khar. “At least four people were killed and four others were wounded in the blast outside the main gate of the hospital,” said Mohammad Riaz, chief doctor at the government hospital.

North Waziristan and Bajaur are two of Pakistan’s seven federally-governed tribal agencies, most of which are infested with Al Qaeda and Taliban militants. The Army is continuing with development work, security sweeps, and limited operations in these areas ahead of the national and provincial elections in a bid to secure peace on Election Day, May 11.